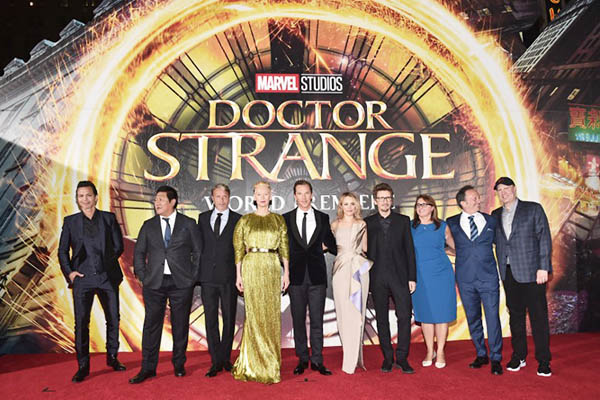 Surgeon-turned-sorcerer Doctor Strange cast his spell on North American audiences, debuting at the top of the box office in the latest triumph for Marvel Studios, industry estimates showed on Sunday.

The movie, which stars Benedict Cumberbatch as world-famous neurosurgeon Stephen Strange—whose life changes forever after a horrific car accident robs him of use of his hands—raked in $85 million, box office tracker Exhibitor Relations said.

The 14th film in Disney’s Marvel Cinematic Universe, Strange follows recent studio successes including Captain America: Civil War, which made more than $1 billion worldwide, as well as other crowd pleasers such as the Thor, Iron Man and The Avengers franchises.

Debuting in second place was DreamWorks’ animated Trolls, based on the classic plastic dolls known for their multi-colored hair. Featuring the voices of Justin Timberlake and Anna Kendrick, the film made $45.6 million in its first weekend in theaters.

Third place went to Hacksaw Ridge, also in its debut weekend, which raked in $14.8 million. The movie tells the true story of World War II army medic Desmond Doss, the first U.S. conscientious objector, who went on to receive the Medal of Honor despite refusing to carry a weapon.

Boo! A Madea Halloween—the latest installment in Tyler Perry’s Madea comedy franchise, fell to fourth place with $7.8 million, down three spots from its former perch at the top of the box office. And Inferno, the third installment of Sony’s Da Vinci Code franchise, directed by Ron Howard, earned $6.3 million in the second weekend since its release.

Rounding out the top 10 films were: