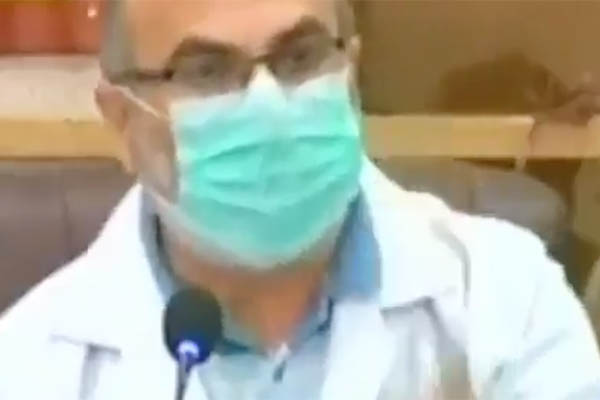 Several members of the Pakistan Medical Association on Wednesday urged the government and the clergy to reconsider their decision to ease overall lockdowns and resume congregational prayers, warning that the rapid pace of coronavirus spread in the country risked overwhelming healthcare infrastructure.

Addressing a press conference in Karachi, the doctors—belonging to various healthcare facilities—said a point was coming when they would be forced to choose between saving the lives of two patients because they lacked the resources to cope with the massive influx.

“This is a medical problem, which has accompanying economic and social effects,” said Dr. Saad Niaz, a gastroenterologist at the Dow University of Health Sciences. “But we need to understand that this is nonetheless primarily a medical issue,” he said, summarizing how the virus had spread thus far.

“From April 16-21, we went from 6,772 patients to 9,464 patients, which is a nearly 40% increase [of over 2,500 patients] … if you count patients from Feb. 25, we took much longer to reach the first 2,000 patients,” he said, adding that the initial low numbers had created the impression that coronavirus was not a major issue for Pakistan.

“The reason for that [low numbers] is our testing capacity, which is an issue that will remain,” he said, adding that doctors across the country believed the number of cases was much higher than currently reported and would continue to rise. “We have not even peaked yet,” he said, adding that people needed to stop believing myths that the heat would kill the virus, or people of the subcontinent had some “special immunity” to it.

“If we hadn’t placed the country under lockdown, then the situation would have been different,” warned Dr. Niaz, saying the numbers had been trickling in because of now-relaxed movement restrictions. “Similarly, if we don’t act now, two weeks down the line the situation will be very different,” he added.

According to the briefing, around 80 percent of all wards in Karachi are already saturated and cases were still rising, especially among people under 60. Dr. Niaz also pointed out that in Sindh alone, 162 doctors had been infected with COVID-19, adding that the numbers were similar in the rest of the country.

“We don’t have what it takes [healthcare facilities] to fight this,” he said, noting that there was still a shortage of personal protection equipment for doctors throughout Pakistan.

“The severity [of coronavirus] is much more than we think; all experts think this will blow out of control over the next two to four weeks,” he said, adding that with hospitals reopening and non-COVID patients also being treated, healthcare facilities would soon have to turn away new patients.

“Projected figures are at 70,000 and if even 10 percent of those are serious cases, we will not be able to accommodate them all… there are no ventilators,” he said, reiterating that the government’s only option was to be more aggressive with preventative measures.

“I fear we may reach a point where we have to treat patients on roads. We will have to decide between the life of a 35-year-old and 55-year-old, and be forced to give preference to the younger one,” he said.

Dr. Abdul Bari, CEO of Indus Hospital, also addressed the briefing, saying all doctors had vehemently protested against the federal government’s move to relax lockdowns. “We thought that a lockdown of at least two incubation periods—one month—would take place and that would show some positive signs,” he said.

A third doctor also regretted that the lockdown had been scaled back. “The Sindh government had taken good measures in the beginning… That has turned into a joke now,” he said. “There are countless vehicles on the road… the government made a huge blunder” in agreeing to ease restrictions at this juncture, he added.

While the ruling federal government did not issue any response through Special Assistant to the P.M. on Information Firdous Ashiq Awan, spokesperson Shahbaz Gill chose to respond to the doctors by accusing them of “playing politics.” His dismissal of front-line workers in the fight against COVID-19 has provoked anger and prompted backlash on social media.

Pakistan last week eased ongoing movement restrictions, exempting large sectors of the economy as well as allowing mosques to resume congregational prayers. The decision to ease the lockdown was opposed by the Sindh government, but has been backed by Prime Minister Imran Khan who believes more people would die of hunger from lockdowns than from the coronavirus.