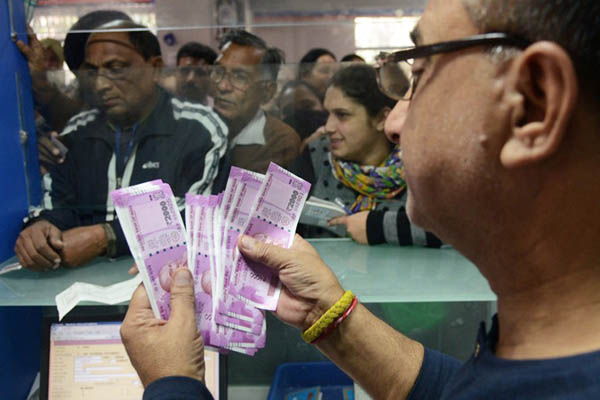 From deploying “cash coolies” to buying Rolex watches, Indians have found unique ways to dodge the government’s surprise move to withdraw high value bills in a bid to tackle widespread corruption and tax evasion. Prime Minister Narendra Modi sent shockwaves through the country by announcing on Nov. 8 all 500 rupee and 1,000 rupee notes—some 85 percent of all bills in circulation—would cease to be legal tender within hours.

The announcement threw India’s cash-dependent economy into turmoil and triggered a mad rush among people with undeclared, unaccounted cash—so-called “black money”—to exchange old notes or use them to buy gold and luxury items.

Tax evasion is rife in India with many small businesses and professionals such as doctors and lawyers asking to be paid in cash to avoid taxes. Only six people earning over 500 million rupees filed returns in 2012-2013, despite there being an estimated 2,100 ultra-wealthy Indians whose net worth exceeds $50 million.

But the government is cracking down and banks must report anybody depositing more than 250,000 rupees, while holding undeclared cash can lead to a penalty of double the tax owed.

There have been multiple reports of factory owners and businessmen asking staff—or even hiring casual laborers—to stand in bank queues and exchange cash for them before the Dec. 30 deadline. The initial over-the-counter currency exchange limit was 4,000 rupees but was later reduced to 2,000 rupees after the government said “unscrupulous elements” were paying the poor to queue to exchange their money.

The government also asked banks to ink people’s fingers—a tactic normally used to fight voter fraud—after they had exchanged bills to prevent them from queuing up again.

Wealthy Indians rushed to make costly purchases with unaccounted cash soon after Modi’s announcement on Nov. 8. Several luxury retailers stocking brands like Rolex and Dior sent emails to clients stating their stores would be open until midnight that day, the Economic Times reported.

The daily said a leading global fashion brand store in Delhi remained open all night immediately after the move was announced, selling merchandise worth more than $150,000 in less than three hours.

Some affluent buyers have reportedly been paying almost twice the market value for gold in old notes. Jewelers who had shut up shop for the day on Nov. 8 reopened their stores within hours and were selling gold all night, local media reported.

Customers lined up outside jewelry stores in Delhi and Mumbai with bags of cash with one report saying they paid as much as 52,000 rupees per 10 grams of gold, almost double the going rate.

Officials say they are keeping an eye on all cash deposits made into new “Jan Dhan” accounts which were opened by the government as a part of its financial inclusion scheme for the poor and farmers and which were designed for deposits such as welfare payments.

Following the withdrawal announcement, many of these accounts have seen deposits of thousands of rupees in a single day. Local media have reported that corrupt individuals are “renting” these accounts to deposit their money in, only to withdraw it later.

In a sign of how desperate some Indians were to convert cash, a massive spike was seen in the number of railway ticket bookings after authorities said old bills could be used until midnight on Nov. 11 to make reservations. Most of these were advance bookings made using old notes.

Bookings can be cancelled at a later date with refunds paid out in new notes with only a small fee deducted.