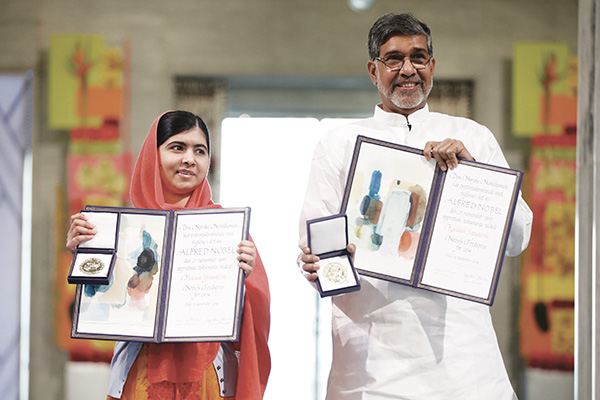 The awards ceremony for the joint winners of the 2014 Nobel Peace Prize, Pakistan’s Malala Yousafzai and India’s Kailash Satyarthi, was broadcast live by almost all Pakistani news channels—reflecting the abiding adulation Malala enjoys in her country, but to which she can’t return without risking her life. The feel-good event was a star-studded affair, and it featured performances by Pakistani musicians Sardar Ali Takkar and Rahat Fateh Ali Khan. To signal the universality of her struggle, Malala took with her Shazia Ramzan and Kainat Riaz—who were also injured in the Taliban attack on her school van two years ago—as well as Nigeria’s Amina Yusuf and Syria’s Mezon Almellehan, who are also defiantly championing education for girls in their countries, and Kainat Soomro. Pakistani Prime Minister Nawaz Sharif and Indian Prime Minister Narendra Modi could have signaled their countries’ commitment to education by showing up. It’s a great pity they chose not to.