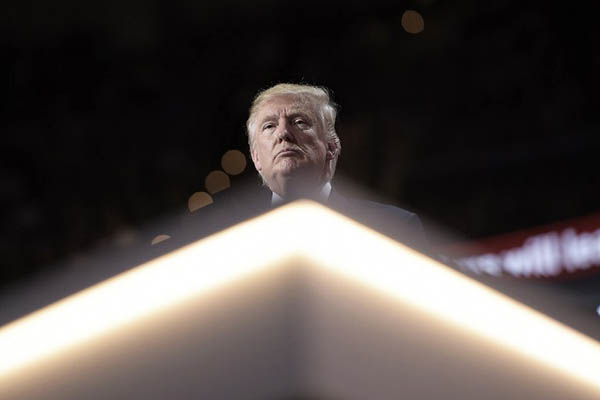 U.S. President Donald Trump on Wednesday made history as he became the first president to be impeached twice by the House of Representatives.

Unlike in 2019, when no Republicans voted in favor of impeachment, members of the president’s own party broke ranks this time and joined Democrats in voting against him. Ten Republicans voted in favor of impeaching Trump, twice the number of Democrats who voted to impeach Clinton. In a statement, Representative Dan Newhouse—one of the Republican who said he would vote to impeach Trump—said that the U.S. president did not “strongly condemn the attack [on the Capitol on Jan. 6] nor did he call in reinforcements when our officers were overwhelmed. Our country needed a leader, and President Trump did not fulfill his oath of office.”

The resolution to impeach Trump came after Democrats attempted to pressure Vice President Mike Pence to invoke the 25th Amendment to oust Trump, but House Speaker Nancy Pelosi has said that an impeachment could block him from running from office again.

Under Article I of the U.S. Constitution, the Senate—with support from 51 senators—can bar a public official who is impeached from holding office in future. The move is being seen as largely symbolic to ensure that the events of Jan. 6 are not repeated under any future U.S. leader.

The article of impeachment—incitement of insurrection—was introduced formally on Monday by House Majority Leader Steny Hoyer. It targeted Trump for his attempt to persuade Georgia Secretary of State Brad Raffensperger to “find” enough votes to turn the state in his favor and for the speech he gave on Jan. 6 before a mob stormed the Capitol. It blames Trump for “engaging in high crimes and misdemeanors by inciting violence against the Government of the United States.”

The impeachment article also notes that during an address to supporters last week, Trump “willfully made statements [that] encouraged—and foreseeably resulted in—lawless action at the Capitol, such as: ‘If you don’t fight like hell, you’re not going to have a county anymore’.”

Despite vocal condemnations of Trump’s actions by most Republican leaders, they have urged restraint, claiming the impeachment would do “far more harm than good.”

The U.S. Senate has only blacklisted three officials from holding office again and each time it involved a federal judge, not a president. A Senate trial could begin on President-elect Joe Biden’s Inauguration Day, according to a memo from Senate Majority Leader Mitch McConnell, who has already announced that he will not summon the Senate back into session until Jan. 19.

The Democrats need to get 17 Republicans onboard to convict Trump. The Senate has a 50-50 split, so they only need to convince one Republican to keep him from running for president in 2024 or any other office in the future.

Trump has called the impeachment process against him a “continuation of the greatest and most vicious witch hunt in the history of our country,” and claimed it is causing “tremendous anger and division and pain” that is “very dangerous for the USA.”