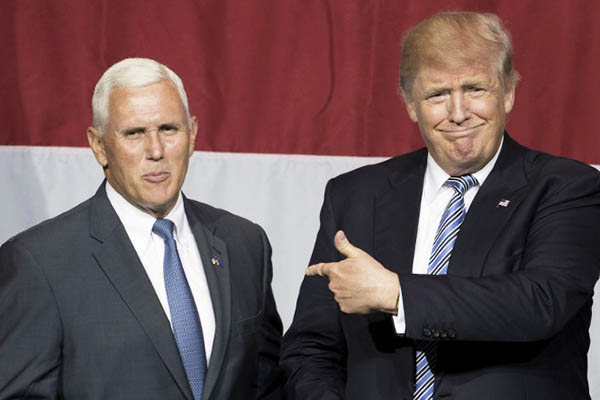 Pence, 57, only emerged on the short list in recent weeks, after better-known party heavyweights including vanquished presidential contenders like John Kasich or Ted Cruz either declined to be considered or appeared to not make the cut.

In a whirlwind 72 hours before the announcement, Trump met privately with Pence and his family, and also with two other men on the short list: New Jersey Governor Chris Christie and former House speaker Newt Gingrich.

Pence brings all-important executive and legislative experience to the ticket, which could assuage concerns among conservatives that Trump lacks governing knowledge or the skills to navigate Congress. “I am pleased to announce that I have chosen Governor Mike Pence as my Vice Presidential running mate,” Trump posted on Twitter.

Pence was seen exiting New York’s Trump Tower on Friday following a meeting with Trump and campaign staff shortly after the announcement. Trump has scheduled a joint appearance with Pence in the Big Apple on Saturday at 11:00 a.m.

Trump had earlier stated he would publicly reveal his pick at a Friday press conference, but postponed it after Thursday’s truck attack in the French city of Nice that left at least 84 people dead.

Pence spent 12 years in the House of Representatives, many of those on the House Foreign Affairs Committee, and also spent time in House leadership. He has been Indiana’s governor since January 2013.

Pence is also seen as having a cool-headed tone and steady hand that could counter the impulsive, often brash Trump, and his social conservatism could allay fears about Trump’s views on issues such as abortion. “Honored to join @realDonaldTrump and work to make America great again,” Pence said, using Trump’s campaign slogan.

Presumptive Democratic presidential nominee Hillary Clinton’s campaign reacted swiftly to the Pence announcement, calling him “the most extreme pick in a generation.”

“Donald Trump has doubled down on some of his most disturbing beliefs by choosing an incredibly divisive and unpopular running mate known for supporting discriminatory politics and failed economic policies that favor millionaires and corporations over working families,” Clinton campaign chairman John Podesta said in a statement.

Even as U.S. media cited sources saying Trump had decided on Pence, Trump fueled suspicion that he was waffling when he said Thursday he had yet to make “my final, final decision.” He stressed he had “great respect” for Pence, as well as for Gingrich and Christie, who are more blunt but also more unpredictable.

Gingrich unleashed harsh new rhetoric after the Nice attack, reflecting Trump’s controversial anti-Muslim position. “Western civilization is in a war,” Gingrich told Fox News on Thursday. “We should frankly test every person from here who is of a Muslim background and if they believe in sharia [law] they should be deported. It is incompatible with Western civilization.”

Pence split openly with Trump last December over his divisive anti-Muslim rhetoric, signaling he might push back against Trump if they were in the White House. “Calls to ban Muslims from entering the U.S. are offensive and unconstitutional,” Pence tweeted at the time.

He is also a staunch free trade advocate, potentially putting him at odds with Trump. The flag-bearer has railed against the Trans-Pacific Partnership, arguing that it will hurt American workers, but Pence has expressed support.

Seen as disciplined, conservative and relatively discreet, Pence earned plaudits from fellow Republicans. “Great pick. @mike_pence is rock solid,” tweeted former 2016 presidential candidate Marco Rubio, a U.S. senator from Florida. “We need someone who is steady and secure in his principles, someone who can cut through the noise and make a compelling case for conservatism,” added House Speaker Paul Ryan. “Mike Pence is that man.”

University of Virginia political professor Larry Sabato said Pence is struggling with low approval ratings in Indiana and is a virtual unknown on the national stage.

Gingrich sounded gracious in losing out to Pence. “I think he will be a really good bridge bringing Republicans together,” he said on MSNBC. “Many people who were skeptical of Trump will find Pence a very reassuring choice.”