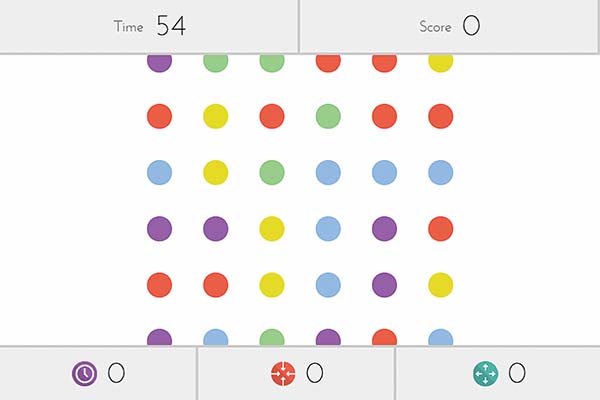 What’s behind the latest gamer craze.

Daniel Savage is a champion iPhone gamer who thinks he’s got the touch. “There’s no secret to genius,” he joked with us by email. “You either have it or you don’t.”

The Brooklyn-based animator is the on-again, off-again king of Dots, which is one of the most addictive new mobile games since Angry Birds and has been downloaded by more than 2 million people since its debut in the App Store this month. Savage—who says he thinks the game “is actually a worldwide IQ test”—spent two weeks atop the global leaderboard before being momentarily routed from first place by his archnemesis, Ben Cherry, for just one hour. He quickly won it back. “I like to give people the chance to catch up to give me a reason to play again,” he said.

Created by Patrick Moberg, a young developer who was once momentarily famous for using the Internet to track down the “girl of his dreams,” and a team at New York City–based Betaworks, Dots is a soothing touch game (available for iPhones running iOS 5.0 or later) that has pocket gamers mercilessly hooked by the thumbs. Each game lasts a quick 60 seconds, but pretty soon 1 minute becomes 2 and then 3 and then 4—and then before you know it, it’s nearly 6 o’clock, and your editor is wondering about the status of your story on Dots.

“I play Dots when I wake up, on the can, on the phone, while watching TV, on the bus, and before I go to sleep,” says Noah Chestnut, 28, a D.C.-based digital consultant who answered a query about Dots addicts on Twitter. “It’s just so simple,” explained Craig Kannalley, 27, when asked what makes it so addictive. The Huffington Post senior editor waxed philosophical, too: “A lot of life is about connecting dots, making sense of things,” he added. “I think there’s larger meaning there as well.”

All this is intended by design. “Patrick really wanted to make something that you didn’t feel guilty playing and that was almost Zen-like, where you feel better after you’re done,” explains Betaworks’ Paul Murphy, vice president of product for the company. “We wanted to create something that was much simpler on your brain.”

Simple or not, Savage believes a certain genius is necessary. And he’s not worried about his archnemesis, who is said to be refining a secret strategy that he hopes will propel him back to the top. “As for the competition,” says Savage, “all I can say is, good luck.”