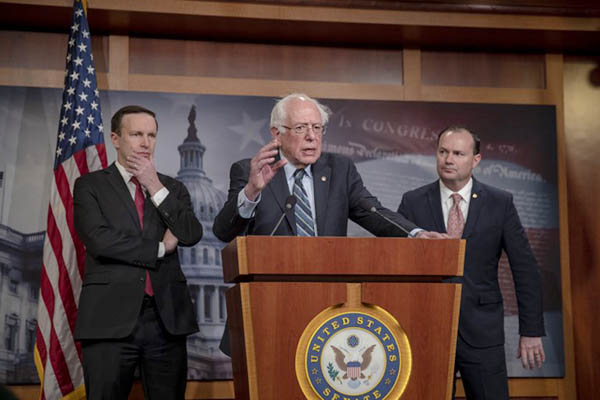 The U.S. Senate dealt President Donald Trump a double blow over Saudi Arabia on Thursday, approving a resolution to end U.S. military support for Riyadh’s war in Yemen, and another holding the Saudi crown prince responsible for the murder of Jamal Khashoggi.

Though largely symbolic, the two bipartisan measures deliver a fresh warning to Trump, who has repeatedly signaled his backing for the Saudi regime even amid a mounting uproar over the Yemen conflict and the slaying of dissident Saudi journalist Khashoggi.

On the Yemen measure, which more broadly attacks the president’s prerogative to launch military actions, 49 Democrats or their allies voted in favor, along with seven Republicans, while another three Republicans abstained. Then, in a voice vote with no opposition, the Senate also approved a resolution condemning Khashoggi’s murder and calling Prince Mohammed bin Salman “responsible” for it.

“What the Senate did today is say that the United States Congress is sick and tired of abdicating its constitutional responsibility on matters of war,” said Senator Bernie Sanders, an independent who votes with the Democrats. “We will not continue to have our military posture dictated by a despotic, murderous regime in Saudi Arabia.”

The resolutions cannot be debated in the House of Representatives before January, and would likely be vetoed in any case by Trump. But the Senate votes send a strong message to the White House over anger on both sides of the aisle towards Riyadh, intensified by the mounting civilian death toll in Yemen and the killing of Khashoggi, a Washington Post contributor who was murdered in the Saudi consulate in Istanbul on Oct. 2.

Anger at the human cost of the war in Yemen has prompted a harder line in Congress about the U.S. military’s role in backing Saudi-led coalition strikes against Houthi rebels.

The Yemen “resolution directs the president to remove U.S. armed forces from hostilities in or affecting Yemen, except those engaged in operations directed at Al Qaeda, within 30 days,” the resolution states.

The resolution came the same day as U.N.-brokered talks in Sweden saw some progress, with Yemen’s warring parties agreeing to a ceasefire at the vital port of Hodeida.

Four years of war in Yemen have killed about 10,000 people and are threatening up to 20 million people with starvation. Republican Senate majority leader Mitch McConnell—a Trump loyalist—had called on his party to vote against the Yemen resolution. But he did back the rebuke of Prince Mohammed, crafted by Bob Corker, a Republican who has been critical of the president.

Under the resolution, the Senate “believes Crown Prince Mohammed bin Salman is responsible for the murder of Jamal Khashoggi,” the measure states. It also calls on the Saudis to release blogger Raif Badawi, his sister Samar Badawi, and Saudi women’s rights activists who were arrested as political prisoners in 2018. The resolution notes “the United States-Saudi Arabia relationship is important to United States national security and economic interests” but calls on Riyadh to “moderate its increasingly erratic foreign policy.”

The rebuke of the young heir apparent to the Saudi throne is a direct challenge to Trump, who has sought to cast doubt on the crown prince’s involvement in the killing and has stressed instead the importance of U.S. trade and military ties with Riyadh. “Here’s what I believe: Saudi Arabia needs us more than we need them,” Republican Senator Lindsey Graham said. It’s “not too much to ask—an ally not to butcher a guy in a consulate. This is not World War II. So I’m not going to look away at what MBS did,” Graham added, using the abbreviation for the crown prince.