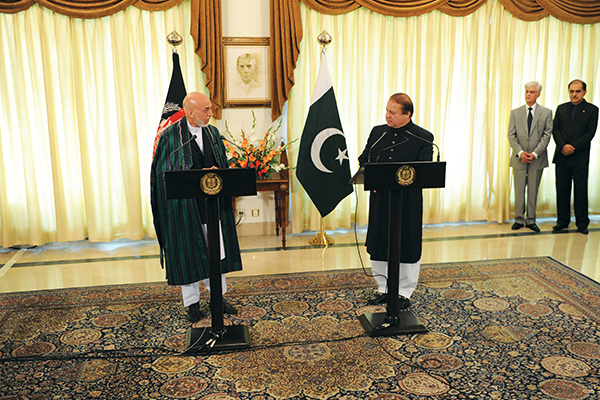 Afghan President Hamid Karzai ended his trip to Pakistan this week by inviting Prime Minister Nawaz Sharif to Kabul. During his visit, which Karzai extended by a day, Afghan officials urged Islamabad to release the senior-most Taliban figure detained in Pakistan and to help arrange peace talks between the Afghan High Peace Council and the Taliban. According to Sharif’s foreign-affairs advisor Sartaj Aziz, Karzai even accepted that Pakistan had no control over the Taliban. But while Karzai’s words in Islamabad were positively sensible, his statements back home reflected little change in his belief that Pakistan is responsible for Taliban attacks in his country. “The killing of innocent engineers and workers shows the Taliban and their foreign masters want Afghanistan to remain a dependent and poor country forever,” he said in response to the brutal execution of six Afghans working with the World Bank. Afghan officials often use “foreign masters” as a euphemism for Pakistan’s intelligence agencies. As U.S.-led foreign troops prepare to exit Afghanistan, Islamabad and Kabul are required to work together to ensure some kind of peace for this part of the world. Playing to the gallery, as is Karzai’s wont, is the last thing either country needs.