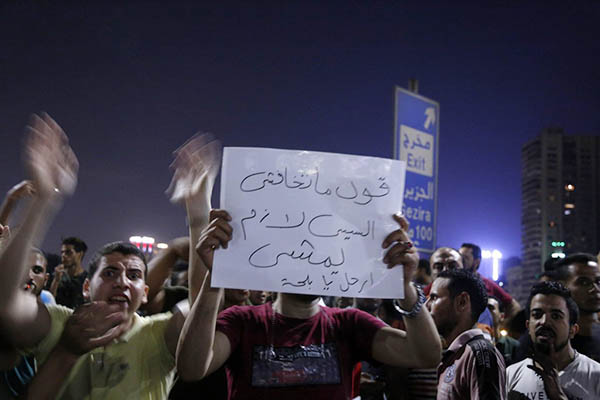 Demonstrators were demanding the former military strongman step down

Rare small protests were staged overnight in Cairo and other Egyptian cities calling for the removal of President Abdel Fattah al-Sisi, but authorities quickly dispersed them and arrested dozens, a security source said.

Hundreds of citizens took to the streets late Friday to protest, chanting slogans including “Leave, Sisi!” and holding up placards. At least 74 were arrested overnight, a security source told AFP, with plainclothes police patrolling side streets of downtown Cairo.

The country effectively banned protests under a 2013 law and a state of emergency is still in full effect.

The protests came on the back of an online call put out by Mohamed Aly, a disgruntled exiled Egyptian businessman, demanding Sisi be toppled. The construction contractor has been posting videos from Spain that have gone viral since early September, accusing Sisi and the military of rampant corruption.

The president flatly denied the allegations last week at a youth conference and sought to assure Egyptians that he “was honest and faithful” to his people and the military.

In his latest video posted early Friday morning on his growing social media accounts, Aly urged Egyptians to head to the streets after a highly anticipated football match between Cairo powerhouses Al Ahly and Zamalek in the Super Cup. Thousands shared footage on social media documenting the demonstrations that sprang up in several cities including sizeable crowds blocking traffic in Alexandria, Al-Mahalla, Damietta, Mansoura and Suez.

Many users commented on the curious absence of military personnel and speculated about internal political squabbles between various Egyptian security agencies.

Under the rule of general-turned-president Sisi, authorities have launched a broad crackdown on dissidents, jailing thousands of Islamists as well as secular activists and popular bloggers. He led the military ouster of former Islamist president Mohamed Morsi in 2013 and won back-to-back landslide elections running virtually unopposed.

At the same youth conference where he denied graft allegations, he also warned of the dangers of protesting—a position he has repeatedly taken. He has regularly invoked security and stability as hallmarks of his reign in contrast to the situations in regional hot spots such as Iraq, Libya and Syria.

But with his government imposing strict austerity measures since 2016 as part of a $12 billion loan package from the International Monetary Fund, discontent over rising prices has been swelling. Nearly one in three Egyptians live below the poverty line on less than $1.40 a day, according to official figures released in July.

Human Rights Watch urged authorities on Saturday to “protect the right” to protest peacefully as well as demanding that those arrested be released.

Sisi flew to New York on Friday night where he is scheduled to address the United Nations General Assembly next week. The president’s office did not comment on the protests, when asked by AFP on Saturday.