Dozens Dead Due to Heat Wave in Sehwan 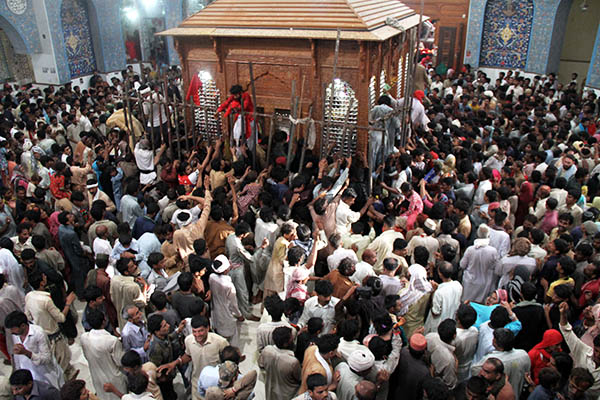 Devotees at the shrine in Sehwan. Yousuf Nagori—AFP

Local health official says 51 people have died since Sunday, with 45 of those perishing due to the rising temperatures.

Dozens of people have died at a religious festival at a shrine in southern Pakistan due to a severe heat wave, officials said on Thursday.

Hundreds of thousands of devotees attended the death anniversary of Lal Shahbaz Qalandar, a 13th century Muslim Sufi saint, at a shrine in Sehwan. People were arriving for the past five days despite temperatures hovering around 47 degrees Celsius.

District health officer Dr. Khalid Arain said that 51 people had died since Sunday, including four women. “Out of the total deaths, 45 died due to the heat wave and suffocation, three died of heart attack, one drowned and two died in road accidents,” Arain said.

Nearly 650 cases of sunstroke were brought to the local hospital in the same period, he said.

The Edhi Welfare Trust, a charity that runs one of Pakistan’s largest fleets of ambulances, put the death toll at 35.