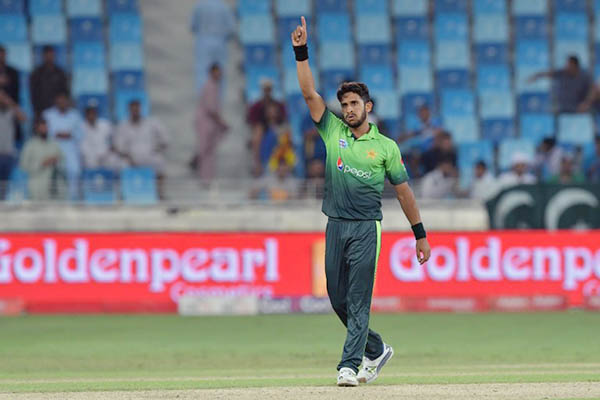 Hasan Ali is officially the world’s best one-day bowler, with an early career record surpassing even legendary compatriot Waqar Younis and a unique “bomb explosion” wicket celebration that is just as eye-catching.

The 23-year-old, who is the leading wicket-taker in the ongoing series against Sri Lanka, has enjoyed a meteoric rise in just 14 months. He became the joint third fastest bowler to claim 50 one-day wickets with the mark achieved in 23 matches, the same number as Australian icon Dennis Lillee and four games fewer than Younis.

Since making his ODI debut against Ireland in August 2016, Ali is the leading wicket taker with 54 victims. He is also the best this year with 43 wickets in 17 matches.

“It’s a dream come true,” Ali told AFP. “I set many goals in my childhood and to be the world number one bowler was amongst the top.” Ali has helped Pakistan to a 4-0 lead in the current series against Sri Lanka with 12 wickets, including 5-34 in Abu Dhabi. He also played a leading role in Pakistan’s Champions Trophy win in June in England where he finished with 13 wickets and was named player of the tournament.

But what has also attracted fans around the world is his celebration every time he takes a wicket—he mimics a bomb explosion, pumping the blasting mechanism that leads to the blast.

Ali first played cricket in his native town of Ladhay Wala Wraich near Gujranwala, an area famous for producing wrestlers and kabbadi players. His elder brother, Ataur Rehman, noticed his talent at an early age and organized a gym and a pitch in the backyard of their family home.

“My elder brother was the greatest influence on my career and after a few first-class seasons I was picked by Peshawar franchise in the first edition of the Pakistan Super League (PSL),” recalls Ali.

Recruited as an emerging player, Ali was mentored by former England coach Andy Flower and ex-Pakistan paceman Mohammad Akram. “I have been blessed with success and the Champions Trophy victory was the best thing. The next big goal is to win the 2019 World Cup in England,” said Ali.

Former Pakistan captain and legendary paceman Waqar Younis praised Ali but warned against piling too much pressure on his shoulders.

“His rise is phenomenal,” Younis told AFP. “But since a lot of events have happened in Pakistan cricket I would like to see Hasan and other talented youngsters be mentored properly so that they don’t get lost.”

Younis was referring to Mohammad Amir’s rise in 2009 before his career was derailed in a spot-fixing case a year later. This year Pakistan has lost dashing opener Sharjeel Khan, banned for five years with two others suspended in a PSL spot fixing case.

“Hasan and other youngsters are assets for our cricket and they can carry our cricket forward. We cannot afford another jolt so I advice they should be monitored and mentored,” said Younis.