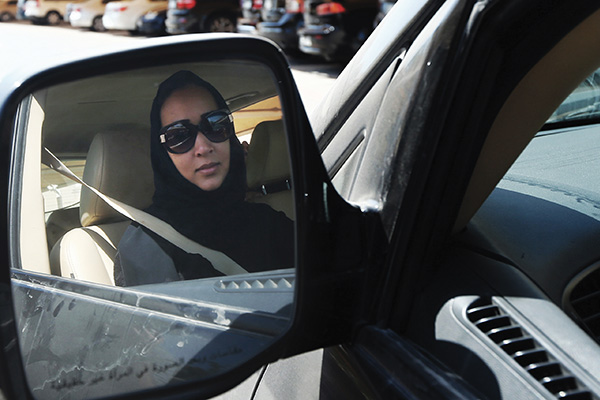 Riding shotgun with a Saudi activist.

Manal al-Sharif, 34, is in the process of moving something momentous: Saudi Arabia’s cultural restrictions on women getting behind a wheel.

While Saudi women are not technically banned from driving, they are prevented from obtaining driving licenses or using foreign licenses. The issue has long bothered the kingdom’s 20 million women subjects. In 1990 a group of Saudi women protested the cultural and legal roadblocks, but they were so severely sanctioned that no one dared to challenge the driving embargo again for more than two decades. Then, in May 2011, al-Sharif decided to hit the road.

One day, al-Sharif decided to take charge of her Cadillac SUV, which she had owned for four years but never drove, as a friend in a pink abaya filmed her. She was “scared and excited” as she turned on the ignition. She said Allah’s name and hit the pedal. It felt, she says, as if she had flown “through the bars” of a cage. The drive lasted all of eight minutes. Her detention by the religious police a few days later lasted six hours. By then, her YouTube video had already clocked 600,000 hits and the news of her journey had spread fairly widely.

Her short drive started a cycle of harassment that continues to this day. One cleric said to her, “You have just opened the gates of hell on yourself.” Another day, she found an email warning: “Your grave is waiting.” Al-Sharif also drew criticism from her own sex, but she attributes this to women who “are jealous, or they don’t want to change the way they are treated in Saudi society.” Her activism has found resonance. “Manal is no doubt one of world’s best examples of people who can move others—even if laws, customs, habits, and powerful governments are opposing her noble attempt,” says Srđa Popović from CANVAS, a Belgrade-based think tank that trains peaceful revolutionaries around the world. Thirteen years ago, Popović helped overthrow Serbian dictator Slobodan Milosevic. Today, she calls al-Sharif “one of my heroes.”

Al-Sharif has neither been disheartened nor intimidated. She and other supporters quickly organized a grassroots campaign: designing a logo, alerting local media, and calling on all women to get out and drive on June 17—and to make videos of their trips. “The opponents kept telling us, ‘There are many wolves in the streets,’” she says. “‘They would rape you, they would harass you, and they would kidnap you if you drive a car.’” She also posted a survey which asked: “Do you want to drive on June 17?” Of the women she polled, 84 percent answered yes. Another question was, “Do you know how to drive?” Only 11 percent answered yes. So she and her campaigners started a driving school using volunteers as teachers.

Empowered, al-Sharif took her cause one step further. She borrowed her brother’s car and went for a drive, passing a police officer en route. She went to jail for nine days for “incitement to public disorder.” Her brother was also detained. When al-Sharif emerged from prison, she found she was the poster child for the right for women to drive in Saudi Arabia. “I call myself an accidental activist,” she says.

Part of the activism, al-Sharif says, goes much deeper than just getting women to drive. She grew up in the 1980s and 1990s in Mecca, where the school curriculum dedicates nearly 40 percent to religious instruction. “We were taught we lived in a perfect society. But we were also taught that if we followed rules we went to heaven, and if we did not we would have hellfire.” In the seventh grade, without knowing why, she was suddenly forbidden to play with a favorite cousin, a boy. They did not meet again for 10 years. She says she mourned not only the lost friendship, but also the implications of separating the sexes. “I was so upset! We were just playing! We were just kids!” she says. “I was learning that people are controlled by fear.”

Once on holiday in Egypt with her parents and her siblings, al-Sharif saw Egyptian women confidently driving, their heads uncovered, their hair flowing. “I just hung my head out the window and stared at them. I could not believe it.”

Academic life was al-Sharif’s release. Her working-class parents—her father was a truck driver, her mother a housewife—encouraged all three of their children to study. “Mom didn’t really ask us to do anything around the house,” she says. “It was more important for her that we studied.” When al-Sharif graduated with high marks, she went into computer science, eventually working for Aramco, a national oil and gas company. But there she saw more injustice: “Women being bypassed for promotions and appraisals—just because they are women.”

She had her “own awakening,” as a Muslim and as a woman, watching the images of the Twin Towers burning on September 11. People were hurling themselves out of windows in an attempt to save their lives. “These men [who did that] were not heroes, but killers” she says. Sent for a year by Aramco to Boston, she had another eye-opener. She rented her own apartment, drove her own car, and no longer needed her father’s signature to travel. Returning to Saudi was a painful lesson. “I had to go to my father to sign papers for me to do anything,” she says. “I could not [even] pick up my son from school.”

Having lived and experienced freedom outside the kingdom, she realized she could not go back to the old ways. She devoted herself to more activist causes inside Saudi, but in May 2012 Aramco finally pushed her out of her job. She found employment in Dubai, and last year got remarried. (The Saudi interior ministry denied her permission to wed her husband, Raphael, who is Brazilian, so they married outside the kingdom.) Her Saudi ex-husband does not permit their son to travel abroad, so she meets him in Saudi Arabia, whose authorities monitor her travel and keep her on a surveillance list.

On Oct. 26, al-Sharif and other activists urged all Saudi women to stand up and take their destiny in their own hands, and drive. The result was that hundreds of women got out in the streets—and drove. And 16,000 signed a petition that demands the government lift the ban or, at minimum, give a “valid and legal justification” for the driving prohibition.

Al-Sharif is currently writing an autobiography, traveling to activist conferences, and speaking out. She says that like other Arab revolutions, once people realize they are being denied their freedoms, they cannot turn their backs. It’s like that first time behind the wheel of her Cadillac. “I have this feeling that you just need to jump,” she says, “To trust yourself.”