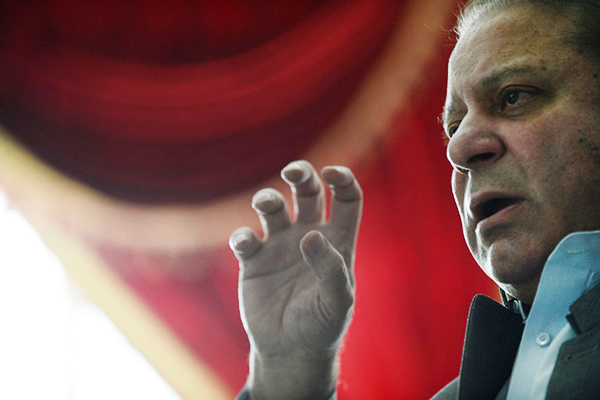 Pakistan will facilitate withdrawal of foreign troops from Afghanistan.

Pakistan’s incoming prime minister said on Monday he wanted to strengthen his country’s fractious relations with the United States, but warned that Washington must take seriously their concerns about drone strikes.

Nawaz Sharif, who won an unprecedented third term in Saturday’s general elections, said the U.S. would have Pakistan’s “full support” as it withdraws the bulk of its forces from Afghanistan by the end of next year.

Missile attacks by unmanned drone aircraft in Pakistan’s tribal northwest, a haven for Taliban and Al Qaeda fighters along the Afghan border, have been a public thorn in relations in recent years. Washington sees the attacks as an important weapon in the fight against Islamist extremism, but they are unpopular in Pakistan because of reports of civilian casualties and because they are seen as an infringement of sovereignty.

Sharif told journalists at his estate in Lahore that he would discuss the issue with the U.S. “Drones are indeed a challenge to our sovereignty. Of course, we have taken this matter up very seriously and also spoken to the Americans during our meetings,” he said. “This is a very important issue and our concern must be understood properly. We will sit with our American friends and we will certainly talk to them on this issue.”

Sharif’s last term as premier came to an abrupt end in October 1999, when he was deposed in a coup led by Gen. Pervez Musharraf. The military ruler enjoyed good relations with Washington, but ties were hammered by a series of crises under the outgoing government led by the Pakistan Peoples Party. Relations reached rock bottom when Pakistan closed overland NATO supply lines for six months in response to a botched U.S. air raid that killed 24 Pakistani border guards.

Ties have warmed again in recent months and Sharif said he would work to see that this continued. “I think we have good relations with the United States of America. We certainly have to listen to each other,” he said. “If there are concerns on either side I think we should address those concerns and strengthen this relationship.”

The U.S. and NATO are due to pull out the bulk of their troops and equipment built up in 11 years of fighting the Taliban in Afghanistan by the end of next year, and Sharif pledged Pakistan’s cooperation. “We will facilitate the Americans as far as the withdrawal is concerned,” he said. “American troops are being withdrawn in 2014 and we will extend full support to them and we will see everything goes smoothly.”

As the Sharif govt. is sworn in the US would do well to present him a gesture of goodwill, the stoppage of drone attacks.In any case the drones do more collateral damage both physical and political than serve a useful purpose.In response the Sharif govt. may protect the flanks of the receding US forces and provide safer exit strategies.His ties to right wing religious parties may help.The end result will be warmer ties between the two countries and protection of our sovereignty.