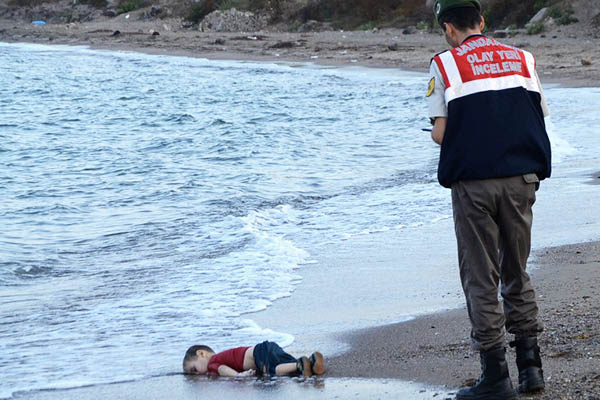 The images of a tiny child lying face down in the surf at one of Turkey’s main tourist resorts has once more put a human face on the dangers faced by tens of thousands of desperate people who risk life and limb to seek a new life in Europe. Wearing a red T-shirt and blue shorts, the child—identified as three-year-old Aylan Kurdi—is believed to be one of least 12 Syrians who died when their boats sank trying to reach Greece. The bleak image spread like lightning through social media and dominated front pages from Spain to Sweden, with commentators unanimous it had rammed home the horrors faced by those fleeing war and conflict in the Middle East and Africa.

Circulating with the Turkish hashtag #KiyiyaVuranInsanlik (Humanity washed ashore), the picture made it to Twitter’s top world trending topics.

“Tiny victim of a human catastrophe,” said Britain’s Daily Mail, while Italy’s La Repubblica tweeted the words: “One photo to silence the world.”

“If these extraordinarily powerful images of a dead Syrian child washed up on a beach don’t change Europe’s attitude to refugees, what will?” Britain’s Independent said in remarks echoed in newspapers across the continent.

On Wednesday, the U.N. Security Council said it was discussing a draft resolution to address the crisis that diplomats said may allow an E.U. naval force to seize ships operated by migrant smugglers in international waters. More than 350,000 people have made the perilous journey from North Africa to Europe this year, many trafficked by people smugglers from war-torn Libya, where nearly 3,000 migrants were rescued Wednesday close to the coast.

France, Italy and Germany, meanwhile, urged a rethink of European asylum rules to ensure “a fair distribution” of migrants throughout the 28-member bloc, as tensions soared between European states over how to tackle the huge influx.

Spanish Foreign Minister Jose Manuel Garcia-Margallo told Germany daily newspaper Die Welt that Spain has “been ready from the start to welcome as many people as possible” but called for a “fair” distribution of refugees among member states.

In Britain, where Prime Minister David Cameron’s government has accepted a lower number of asylum seekers in proportion to its population than most other E.U. countries, tens of thousands of people signed petitions demanding change.

By late Wednesday, some 46,600 people had signed a petition urging the government to accept more asylum seekers, the number doubling in a few hours. Another garnered 135,000 signatures in four days, while a third raised more than 13,000 supporters.

The government is obliged to respond if a petition has more than 10,000 signatures, and if it reaches 100,000, the issue will be considered for debate in parliament.

The escalating migrant crisis has exposed deep divisions in the E.U.’s policy, sparking friction between transit nations where the migrants arrive by sea or land and those where they hope to seek asylum, mainly in northern and western Europe. In Hungary, which has been on the frontline of the huge wave of new arrivals, scuffles broke out between police and swelling crowds of migrants, numbering some 2,000, who had been prevented from boarding trains at Budapest’s main international station.

“No police! No police!” and “Germany! Germany!” they chanted, some running forward and hurling plastic bottles as riot police pushed them back.

There have been several tense encounters between the crowds and police following Hungary’s decision to prevent migrants traveling west on Tuesday, after several thousand boarded trains bound for Austria and Germany the previous day.

The situation is also becoming increasingly desperate on Europe’s sea borders after a dramatic spike in the numbers of migrants leaving Turkey by sea for Greece over the past week, among them the tiny toddler whose death has caused such outrage.

A rescue worker from Bodrum identified the boy as Aylan Kurdi to AFP. Media reports said he was three years old. Aylan was believed to be traveling with his family on a tiny boat built for four people but which was carrying 15 refugees, believed to be from the Syrian Kurdish town of Kobane, who fled to Turkey last year to escape Islamic State extremists.

The toddler was one of at least 12 Syrian migrants who died, five of whom were children, including five-year-old brother Galip. Another 15 people were rescued.

“The boat sank around 4:00 a.m., close to the lighthouse in the Akyarlar region,” the rescue worker said, suggesting the boats had capsized. “Most probably they were panicked and many didn’t know how to swim.”

The Syrians “almost certainly died as they tried to reach safety in Europe by boarding a smuggler’s boat,” said Peter Bouckaert, Human Rights Watch’s director of emergencies. “Instead they ended up as the latest victims of Europe’s paltry response in the face of a growing crisis,” he wrote in an acerbic article.