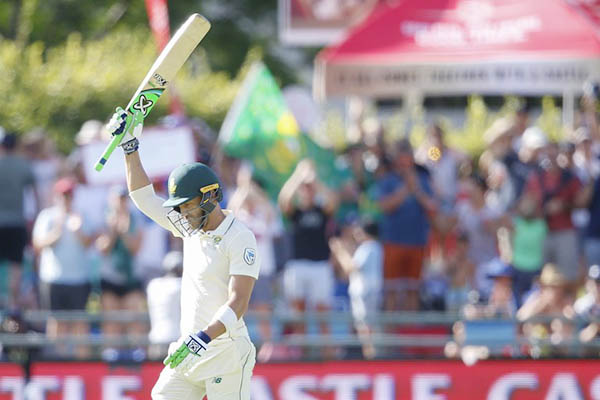 After winning series over Pakistan, South African captain says Test cricket is the ‘the most exciting format of all’

Faf du Plessis said on Sunday that Test matches were cricket’s most exciting format after his side clinched their series against Pakistan with a nine-wicket win on the fourth day at Newlands on Sunday.

The South African captain disagreed with Pakistan coach Mickey Arthur’s criticism of the pitches for the first two Tests, both won by South Africa in less than four days.

Du Plessis said lively surfaces and an attacking mindset, encouraged by Twenty20 cricket, had helped make Test cricket exciting. “There are not a lot of Test matches that are going five days around the world any more,” he said. “The speed of play has gone up tremendously. Test cricket has evolved and it is great for the fans. They are getting fours, sixes, lots of wickets and pace bowlers bowling. Test cricket for me the last few years has been the most exciting format of all.”

Du Plessis said the pitch at Newlands had been challenging on the first two days but there were rewards for batsmen. “If Pakistan batted well yesterday [Saturday], today and tomorrow would have been good batting wickets. It flattened out and the ball got soft. It was tough on day two but we scored close to 400 runs,” he said.

The South African captain felt Pakistan had missed a chance to put pressure on the hosts by failing to capitalize on a sparkling third wicket stand between Shan Masood and Asad Shafiq on Saturday. The tourists reached 159 for two but were bowled out for 294, leaving South Africa an easy target. “They had an opportunity to get 150 [ahead] on the board but we did really well after tea, making sure we did not let the opposition get back in the game,” he said.

Pakistan captain Sarfraz Ahmed said the loss of five wickets on the first morning after his side were sent in had put Pakistan in a position from which it was difficult to recover.

A first innings total of 177 was not enough to put pressure on the South African batsmen, a situation made worse by what Sarfraz described as a poor bowling performance. “Our bowling was not up to the mark,” said Sarfraz. “Our bowling average speed was 130 (kilometers an hour), South Africa were bowling at 145. Our bowling was far better [in the first Test] in Centurion.”

Apart from being down on pace, Sarfraz said the Pakistan bowlers delivered too many loose balls to provide scoring opportunities for the South African batsmen.

Sarfraz acknowledged that a single warm-up game had not been enough to prepare Pakistan for South African conditions but he took heart from the second innings in which Shan Masood, Asad Shafiq and Babar Azam scored impressive half-centuries. “That is how you play Test cricket,” he said. “We are getting better day by day. Hopefully we will do well in Johannesburg. We have nothing to lose.”

Theunis de Bruyn, opening in place of Aiden Markram, who suffered a badly bruised right thigh while fielding, made only four before he was caught off his glove by Sarfraz while attempting to pull a bouncer from Mohammad Abbas.

Hashim Amla was forced to retire hurt on two after being hit on the right upper arm by a ball from Mohammad Amir which lifted sharply off a good length.