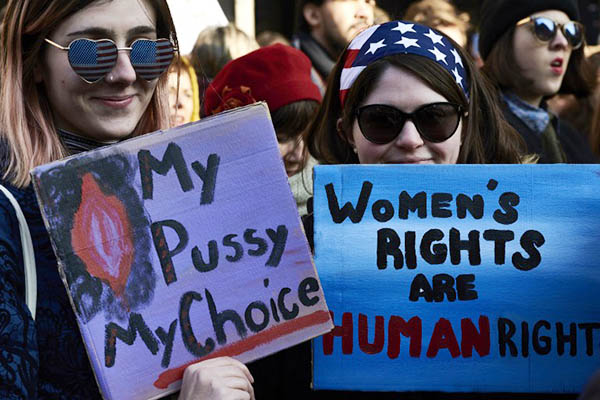 Tens of thousands of people took to the streets of London, Paris and other cities worldwide on Saturday in solidarity with women-led marches in the United States opposed to President Donald Trump.

“Our Rights Are Not For Grabs—Neither Are We” were among the banners held aloft, along with “We shall overcomb” and “Make bigotry wrong again.”

Hannah Bryant, a 34-year-old museum worker, brought her four-year-old daughter—both of them wearing the bright pink “pussy hats” donned by U.S. demonstrators. “I’ve been teaching her about equality and prejudice,” she said.

U.K. organizers said 100,000 attended the London march, although there was no independent verification as police do not give an estimate.

In the U.S., organisers said more than 2.5 million people had signed up online to take part in one of the 600 marches planned around the globe.

In Paris, at least 7,000 people gathered near the Eiffel Tower, according to police, holding up banners that read “liberty, equality, sorority,” in a reference to France’s national motto.

“I am here for women and for all minorities because Trump is a threat to all humanity,” said U.S. national Kendra Wergin, who is in her mid-30s. Andreia Rossi, a 39-year-old Brazilian, told AFP: “He has lied to all those who voted for him, and that can happen in France too.”

Françoise Seme Wallon, 70, a member of the European Union of Women, said for her Trump is “a nasty guy and he’s dangerous for the whole world.”

Right-wing populists and nationalist groups in France and elsewhere in Europe have been emboldened by Trump’s victory as well as by Britain’s vote last year to leave the European Union. While Trump won 42 percent of the women’s vote in the U.S., many worry that gender rights and other progress on women’s health, contraception and abortion could be chipped away.

In Barcelona, Rome, Amsterdam, Prague and Geneva too, protesters were enraged by Trump’s derogatory remarks on women. “We are here for women and for human rights,” one of a large contingent of American expatriate women told SkyTG24 news channel in Rome. “We must defend democratic values,” said Karen Olson, who organized the Swiss march, as motorists driving by honked their horns in support.

“Bridges not walls,” read one of their banners, a reference to Trump’s threat to build a wall separating the United States from Mexico to stop migrants from entering the country—and to have Mexico pay for it.

Hundreds rallied in front of the U.S. embassy in Berlin, chanting pro-migrant slogans in a nation that welcomed nearly a million people fleeing war and poverty in 2015. “No hate, no fear, immigrants are welcome here,” they cried.

A rally was also held in front of the U.S. embassy in Lisbon. “Trump’s rise reminds me of what my mother used to tell me about Hitler’s rise to power,” said Bert Wiesel, 69, a Swiss-American protester.

Women led marches in some 20 cities across Canada, with thousands turning out from Halifax to Vancouver, Ottawa and Toronto. “The world has radically shifted over the last two months,” said Rachel Zellars, a lawyer among the 2,000 people marching in Montreal. “The American election has sent a strong reminder of the work still to be done” for women’s rights.

Anti-Trump protests were held in Australia with several thousand marching in Sydney and Melbourne. And in New Zealand, hundreds joined demonstrations in the capital Wellington as well as in Auckland.