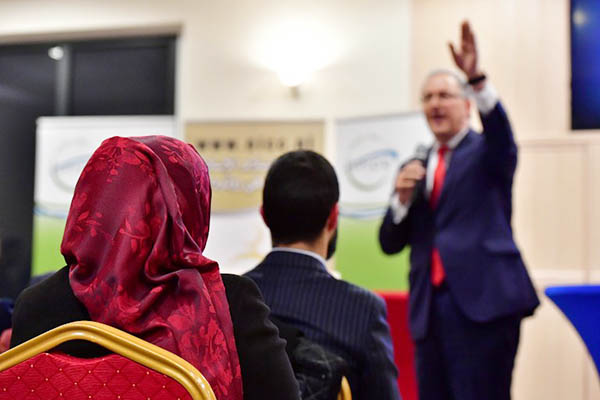 Discussion occurs as anti-Islam Freedom Party set to emerge as one of largest in parliament.

Hundreds of Dutch citizens packed into a Rotterdam mosque on Friday for an animated debate on the role of Muslims in the country, a central theme as key elections loom.

The Essalam mosque—the biggest in The Netherlands—hosted the evening, which comes as the Freedom Party of far-right anti-Islam M.P. Geert Wilders appears set to emerge as one of the largest in parliament in Wednesday’s vote.

Wilders has vowed to bar Muslim immigrants, close mosques and ban sales of the Quran, and new polls late on Friday suggested he was consolidating his second place behind Prime Minister Mark Rutte’s Liberal VVD and could be poised for his best polls showing ever.

Participants voiced their fears and anxieties as well as incomprehension at growing polarization in The Netherlands, which has long prided itself on its culture of tolerance. “I have become someone else in the eyes of others,” said blogger Nourdeen Wildeman who has a large following on social media. “Without doubt, the dangers posed by Islamic State group and other radical Muslim groups have pushed people to look at each other differently.”

Some 12.9 million voters will head to the polls next Wednesday in a general election seen as a key litmus test of the rise of populist and far-right parties ahead of other national votes in Europe later this year. Estimates put the country’s Muslim population at between 840,000 to 960,000, or around 5 percent of some 17 million people. Most are of Turkish or Moroccan descent, according to the Dutch central statistics office.

While the blonde-haired Wilders, dubbed by some “the Dutch Trump,” did not attend the debate, his presence loomed large even if few voiced his name. “I see too many people who shut themselves away, who hide in their corner and think ‘This will pass eventually’,” said Rotterdam mayor Ahmed Aboutaleb. “But it won’t just pass if you are a spectator and take a back-row seat.”

The first immigrant Muslim mayor to be elected in the country, Aboutaleb remains popular in the port city, which has a large immigrant population. A member of the Labour party who was born in Morocco and came to the country as a boy, he has personally taken issue with some of Wilders’s incendiary remarks.

But despite being convicted of discrimination last year, Wilders has not reined in his rhetoric. He officially launched his election campaign in mid-February by denouncing those he called “Moroccan scum” and vowing to return The Netherlands to the Dutch. “We are seeing that people are less accepted,” said Farid Azarkan, a leading member of the party called Denk, or “Think” in Dutch.

Some 40 percent of Turkish- and Moroccan-Dutch citizens say “I don’t feel at home, because I am not accepted,” he said.

Denk, created in 2015, is predicted to win two seats in the 150-seat parliament, according to the latest polls released on Friday by respected pollster Maurice de Hond. Rutte’s Liberal VVD, the ruling partner in the outgoing coalition, is seen winning a narrow lead with 24 seats, while Wilders’s PVV and a long-established Dutch party the Christian Democratic Appeal (CDA) are predicted to take 22 each.

In third place, the polls suggested the left-wing ecologists GroenLinks could complete a stunning rise by winning 20 seats.