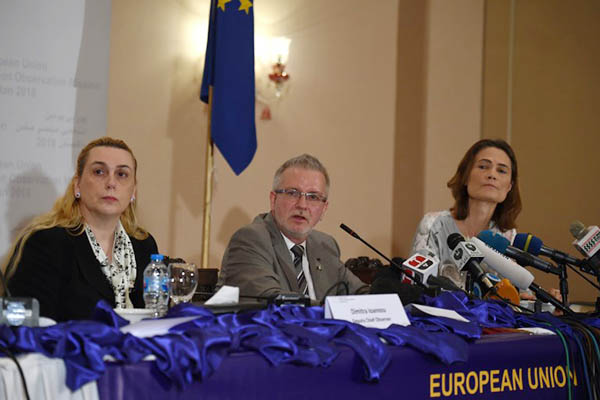 Without naming any culprits, chief observer tells media there was ‘systematic effort to undermine former ruling party’ throughout campaign

The European Union expressed concern over a “notable lack in equality of opportunity” in Pakistan’s general elections, which was “not as good” as the country’s previous vote, according to observers who presented a preliminary assessment in Islamabad on Friday.

The E.U.’s chief observer Michael Gahler noted a “systematic effort to undermine the former ruling party” throughout the campaign, though he avoided naming any culprits.

Cricket hero Imran Khan has swept to an emphatic victory in the disputed election, according to official figures, though he will need to seek a coalition to form a government. The pivotal election has been branded “Pakistan’s dirtiest,” after widespread claims in the months leading up to the vote that the playing field was fixed in Khan’s favor.

The PMLN, which claims it was the target of military manipulation, has vowed to fight the results in court. “Our assessment of the election concludes that the electoral process 2018 is not as good as that of 2013,” Gahler told reporters in Islamabad, referring to the previous election, which was Pakistan’s first-ever democratic transfer of civilian power.

“It is our assessment that despite positive changes to the legal framework … and a stronger and more transparent Election Commission, the electoral process of 2018 was negatively affected by the political environment,” he said. “A number of violent attacks targeting political parties, party leaders, candidates and election officials, severely affected the campaign environment,” he added.

“Many of our interlocutors acknowledged a systematic effort to undermine the former ruling party through cases of corruption, contempt of court and terrorist charges against its leaders and candidates,” he continued.

Despite legal provisions he said “we have concluded that there was a lack of equality of opportunity.”

Election authorities had granted military officers broad powers inside polling centers, further stirring fears of manipulation. “We were struck by the significant security presence at polling stations. We do understand the need for security, however elections are an act of civil society and we look forward to a move of greater civilian rather than military oversight, particularly inside the stations where people are casting their ballot,” Lambert said.

Separately, the Commonwealth Observer Group also presented its interim findings. “Some stakeholders questioned the impartiality of the military and judiciary and cited the timing of court cases against certain political leaders and candidates as an example,” the group’s chairman, General Abdulsalami A. Abubakar, told media.

However the “scale of procedural irregularities during the voting process was relatively low,” a Pakistani election observer group, the Free And Fair Election Network (FAFEN), said in its preliminary assessment on Friday.

The group, which said it observed 37,001 of the more than 85,000 polling stations across the country, noted there were irregularities that need to be addressed, but that it expected election officials to “allay the concerns of major political parties over the integrity of results.”