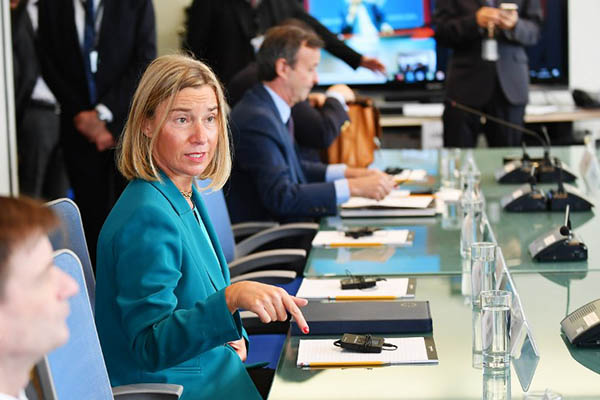 As doubts grow over China’s vast “Belt and Road” trade infrastructure project, the E.U. is launching an alternative plan for Asia that it says will not saddle countries with debt they cannot repay.

E.U. member countries are expected to sign off on the new “Asia connectivity strategy”—which aims to improve transport, digital and energy links while promoting environmental and labor standards—in time for a major summit of European and Asian leaders next month.

Brussels insists the scheme is not a response to any other player, but its launch comes as the sheen fades on Beijing’s “new Silk Road” initiative, which envisions railways, roads and ports being built across the globe using billions of dollars in Chinese loans.

Federica Mogherini, the E.U.’s diplomatic chief, said talks have been going on for several months with a number of Asian countries that were “interested in looking at the European way.”

“Our initiative will aim at creating jobs and economic growth and benefits for the local communities,” she told reporters. “I would not say if this is different from other’s proposal but this is our proposal.”

Maaike Okano-Heijmans, an E.U.-Asia relations expert at the Clingendael Institute in the Netherlands, said the initiative was a “very important step” after criticism of the E.U. in some quarters that it has been slow to respond to Chinese soft power plays.

“We cannot accuse them of not having a vision any more. The challenge is how to turn this into something that’s really an alternative to some countries. Because that requires money and more money and more money,” Okano-Heijmans told AFP, saying “nobody can rival Chinese money.”

President Xi Jinping said earlier this month that China’s trade with Belt and Road countries had exceeded $5 trillion, with outward direct investment surpassing $60 billion. But some countries are beginning to question whether the strings attached to the money make it more of a burden than a benefit.

While much of the hard detail of the E.U. scheme—including the vital question of finance—is yet to be worked out, the proposal stresses the importance of “high environmental and social standards” and of the “fiscal and financial sustainability of infrastructure projects.”

This appears designed to directly address a major criticism of the Belt and Road plan, launched in 2013, that the apparent Chinese largesse is effectively creating debt traps. These fears were highlighted last year when Sri Lanka had to grant a 99-year lease on a strategic port to Beijing over its inability to repay loans for the $1.4-billion project.

Concerns have grown and, in August, Malaysia said it was shelving three Beijing-backed projects, including a $20 billion railway, while Pakistan—until recently an enthusiastic recipient of Chinese money—has vowed more transparency amid fears about the country’s ability to repay loans.

And as cyber security becomes an increasingly important consideration for governments around the world, the E.U.’s insistence on transparency may prove more appealing than involvement in China’s “digital Silk Road,” said Philippe Le Corre of the Europe and Asia Programs at the Carnegie Endowment for International Peace. “It’s basically allowing Chinese telecoms companies to build infrastructures in these countries, gifting access to portals and e-commerce platforms, anything digital,” Le Corre told AFP. “You’re basically having a Chinese footprint on a very long term and you’re not leaving an alternative.”

Some countries are beginning to realize, Le Corre said, that “it’s not good to put all your eggs in the same basket and that being a dependent of the Chinese empire is a big risk, certainly when it comes to controlling information and controlling technology.”