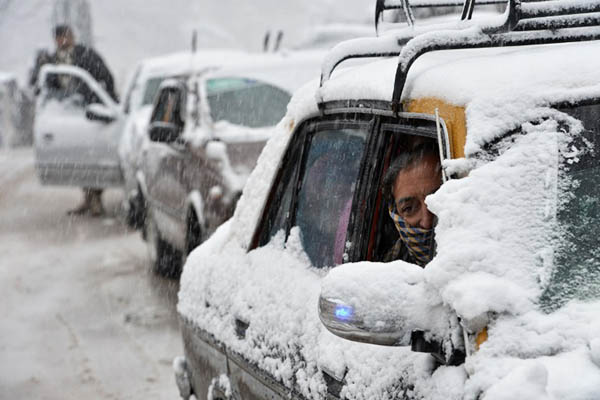 Earliest recorded snowfall in 40 years has damaged power lines and some small bridges in the Mansehra area.

Hundreds of tourists were stranded on Monday after the earliest snowfall in 40 years blocked a main highway in Pakistan’s northern areas, dumping three feet of snow on one town in less than 24 hours.

Authorities sent heavy machinery along with troops and rescue workers to clear the roads in the Naran Valley in Mansehra district. Pakistanis enjoying a long weekend for Ashura in the holy month of Muharram had traveled to the area, popular for its natural beauty, when they were caught off guard by the unprecedented snowfall.

“More than 1,200 people have so far been evacuated but still some 800 to 1,000 people are stranded there and rescue work is ongoing,” said Najeeb Ur Rehman, the top police official in Mansehra district.

Officials said the town of Naran was the worst affected, receiving more than three feet of snow since early Sunday. One coal miner was killed late Sunday when a mine collapsed due to a glacier break-off in Babusar area near Naran. Authorities rescued 15 other coal miners trapped by the collapse, Rehman said.

The snowfall has also damaged power lines and some small bridges.

Rehman said the first priority had been to evacuate drivers stranded on the roads by the snow, and that authorities would now concentrate on extracting tourists trapped in their hotels.

The first snow does not usually hit Pakistan’s northern areas until early December, with officials saying this was the earliest recorded snowfall in 40 years.