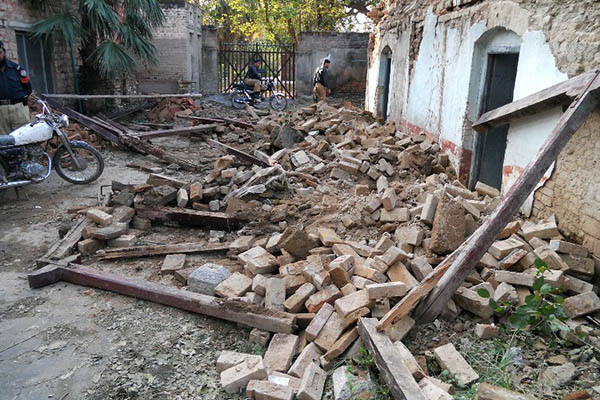 Residents of Pakistan-administered Kashmir live in constant fear of a repeat of the decade-old tragedy.

The massive earthquake that hit Pakistan and Afghanistan on Monday caused panic among survivors of a 2005 quake disaster, with parents describing frantic efforts to reach their children for fear “doomsday” had come again.

On Oct. 8, 2005 a 7.6 magnitude quake ripped through the region, killing an estimated 75,000, wounding 128,000 and displacing another 3.5 million. Survivors had just marked the tenth anniversary of the tragedy when Monday’s 7.5 magnitude quake struck.

“I felt like doomsday was being repeated,” said Shehnaz Rasheed, whose seven-year-old daughter was killed in 2005.

With searing visions of the death and destruction a decade ago, she rushed towards her sons’ school—frantic to reach them so she could “die together with them if we had to die.”

Speaking from her house in Muzaffarabad in Pakistan-administered Kashmir, near the epicenter of the 2005 quake, Rasheed said she had left everything behind in the dash to find her children. “I did not even close the doors of my house and did not care for anything on the road,” she said, her voice trembling.

She was not the only parent to panic, with witnesses in Muzaffarabad describing mothers fainting in the moments after the quake as fear for their children overwhelmed them.

The epicenter of Monday’s 7.5 magnitude quake was several hundred kilometers from Muzaffarabad, across the border in Afghanistan. Located in a sparsely populated rural area, unlike the urban areas hit in 2005, it was also far deeper than the earlier quake, with U.S. geologists putting it at more than 200 kilometers beneath the ground.

But the region ravaged by the 2005 disaster has yet to recover, and some survivors found themselves sheltering from Monday’s tremor in homes and buildings still not repaired.

Zainab Bibi, whose house collapsed 10 years ago, was fearful it would come down on her family again. They had rebuilt the house with a roof of steel sheets instead of concrete, but the 48-year-old said she was still too afraid to shelter beneath it.

“I was afraid of going inside the house and sat out in the open until late in the night despite the cold weather,” she said.

Monday’s quake filled her with a sickening sense of déjà vu. “I heard a strange, terrifying sound and the earth trembled in the same way. It was the same atmosphere,” she said.

Along with the promises of reconstruction and development that never materialized after 2005, hundreds of people who were listed as missing have yet to be found. With all records of whether they survived destroyed in the chaotic aftermath, many relatives are still struggling to trace them and refusing to give up hope.

Derelict construction sites, half-built roads and piles of building material occupy the spaces where thriving towns and cities should exist. In some cases people have rebuilt their homes along the quake fault line, despite warnings from experts that another and even bigger quake may yet strike.

For Muzaffarabad shopkeeper Khwaja Bashir, the warning is urgent. “I witnessed a lot of destruction in 2005,” he said. “Anything can happen even now.”