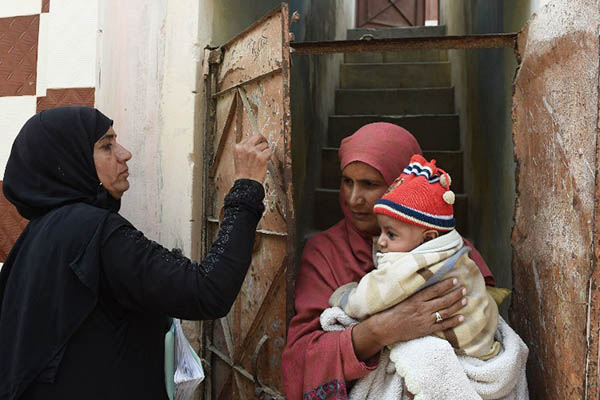 Vaccinators are recruiting local representatives to reassure parents unsure of benefits of vaccination.

In a rundown district of Karachi, Rabia balks at a neighbor’s proposal to vaccinate her children, demonstrating one of the biggest hurdles to eradicating polio in Pakistan by the end of the year: confused and frightened parents.

Rabia, perplexed and surrounded by children in her modest two-room home, voices fears the vaccine to the crippling disease may in fact cause infertility. “She was afraid there might be some harmful elements in the vaccine,” says Sharmeen Aslam, neighborhood supervisor of a team of vaccinators. “I told her there weren’t—and now, since I live here, she knows she can come and see me if there are any problems, so now she believes me.”

Each month, Aslam and her team divide a handful of dusty streets, each going alone to knock at door after ornate door armed with nothing but their anti-polio drops. She is part of a community vaccination program launched in Pakistan’s biggest city two years ago to ease distrust and suspicion from parents by using staff from their local area.

Pakistan’s anti-polio campaign has long been a dangerous task. One hundred people—both police and health workers—have been killed in attacks targeting polio vaccination campaigns since 2012, including three in Korangi in eastern Karachi in 2014, who were not part of the community program.

The Muslim nation of some 200 million people is one of only two countries in the world where polio remains endemic—the other being war-torn Afghanistan, just over a porous border.

Some Taliban and ultra-conservative religious leaders spread rumors that the vaccine contains ingredients forbidden in Islam, such as pork derivatives, or that can cause infertility as part of a Western plot to reduce the population. Vaccinators are accused of being paid spies, a widespread suspicion which only intensified after the CIA used a fake vaccination campaign to help track down former Al Qaeda leader Osama bin Laden in Abbottabad in 2011.

To dispel doubts, in 2014 the Sindh Emergency Operation Center (EOC), spearheading the fight against polio in Karachi, began hiring local women to take the lead on vaccinations. “Here, everybody knows me, I do not have to worry about my safety,” says vaccinator Shahnaz Ayaz.

She has worked in other neighborhoods before, she says, but admits she was “a bit afraid.”

Ayaz marks each door with a chalk “R” if the inhabitants refuse vaccinations, and darkens the pinky fingernail of children who have been vaccinated with a black marker, a sign that the drops have been administered.

Some 2,500 neighborhood vaccinators like Shahnaz are now working in the metropolis of 20 million. In areas of Karachi covered by the community vaccination program, staff are no longer accompanied by police escorts, with a discreet police presence now deemed sufficient.

Escorts are still necessary in neighborhoods of Karachi with no community programs and parts of other provinces, but a shortage of officers can often hamper progress.

Pakistan’s goals are ambitious: authorities want to vaccinate 35 million children under the age of five, eradicating the crippling childhood disease by the end of 2016. Authorities are now targeting the main geographical incubators of the disease, the tribal areas bordering Afghanistan and the province of Khyber-Pakhtunkhwa in the northwest.

Karachi is a hub for migrants from these areas, posing a major risk to eradication hopes, polio officials say. Vaccinators had previously found it almost impossible to penetrate the remote tribal areas, where Islamists had operated with impunity.

But a major Pakistani military operation against extremists there is giving authorities new leverage—such as refusing to allow families fleeing the fighting through checkpoints unless they allow their children to be vaccinated.

These measures saw the number of new polio cases drop to 54 in 2015, down sharply from 306 new cases in 2014—but the improvement did not prevent 18-month-old Mohammed from losing the use of his right foot before learning to walk.

In Baldia, the Karachi neighborhood where he lives, vaccination has long been hampered by insecurity and distrust, but is now being targeted by the community program. “I dream of the day we have so much community support that children will be walked to the vaccination center to the beat of the drum, as I heard it happens in Yemen,” sighed Shahnaz Wazir Ali, a provincial polio adviser.

More than 2,000 religious leaders have joined in the fight, such as Baldia cleric Mullah Umar Sadiq, who is trying to persuade the neighbors of little Mohammed to have their children vaccinated. “Islam advocates a better society in which every child is raised with the best possible hygiene standards. We need healthy children,” he explains.

Authorities have also built more than 2,500 clinics in Karachi providing vaccines along with basic care in response to parents suspicious about the vast resources deployed against polio while their children have no access to health care or clean drinking water.

The strategies seem to be working: in Karachi, the number of refusals was slashed fourfold in 2015 to about 10,000. But the gains are fragile. Six cases have been reported so far in Pakistan in 2016—including one child who had already been vaccinated, fuelling parents’ mistrust of the drops.