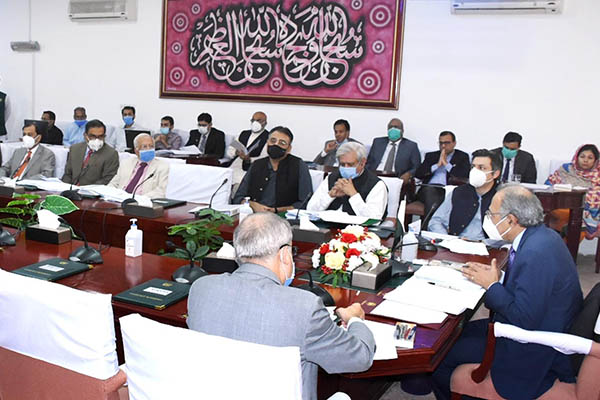 A meeting of the Economic Coordination Committee, chaired by Adviser to the P.M. on Finance Dr. Abdul Hafeez Shaikh, on Wednesday approved increases to power tariffs by up to 17 percent, and to gas prices by around 15 percent.

The decision would earn the government an additional Rs. 152 billion from energy consumers, claimed an official notification. It said that for consumers who use 200 units or less per month, the power tariff would increase by 2 percent, or 32 paisas; while commercial and industrial consumers would see their tariffs increase by Rs. 2.63 per unit, or 17.2 percent.

“The ECC decided to rationalize the tariff of the power sector-FCA and quarterly adjustments, which were due for the period from November 2019 to June 2020,” read the Ministry of Finance notification. It claimed that the National Electric Power Regulatory Authority had envisaged a price increase of Rs. 1.62/kWh, but the government had decided to provide a subsidy for the end consumers so the overall increase was now at Rs. 1.30/kWh.

There was no mention of tariff increases for domestic consumers of over 200 units, but the Power Division has said that it would increase by Rs. 1.62/unit or 10.6 percent.

The ECC also approved an increase of Rs. 50/mmbtu for all industrial consumers, adding that rates for domestic users and tandoors would increase by 3.9 to 14.8 percent. It claimed that this would net the government additional revenues of Rs. 22 billion. According to the ECC, gas tariffs for commercial, cement and CNG consumers have been increased by 3.9 percent; fertilizer-fed plants by 14.8 percent; fertilizer fuel by 4.4 percent; power plants by 6.1 percent; general industry by 4.9 percent; and textile sector by 6.3 percent.

In light of a looming gas shortage, said the finance ministry, gas supplies would be reduced by 50 percent on Saturdays and Sunday for the export sector for at least the next two week to build sustainable pressure in SSGC’s system. “The weighted average tariff will be charged at Rs. 930/mmbtu till February 2021,” it said, noting the current rate was around Rs. 786/mmbtu.

The decisions now have to be placed before the federal cabinet for ratification.

Steel mills and other decisions

The ECC meeting also approved the dismissal of half of the employees of the Pakistan Steel Mills and sanctioned Rs. 31.4 billion for a golden handshake and to clear outstanding dues.

It approved a reduction in the margin of commission of the Trade Corporation of Pakistan on the import of wheat and sugar to 0.75 percent from the existing 2 percent. Shaikh urged officials concerned to keep monitoring the situation and to apprise the ECC of any developments that could result in a wheat shortage.

He advised the Ministry of National Food Security to inform the public about available stocks of wheat to reassure consumers about the commodity.

For the management and maintenance of Gurdwara Darbar Sahib Kartarpur, the ECC allowed the formation of a Project Management Unit, comprising 126 deputations and a recurring budget.

The ECC also allowed, in principle, the conversion of Rs. 2.2 trillion loans to National Highway Authority into government grants.

Committee to Decide if PTI Leaders Should be...