Home Lightbox ECL, the Media, and Other Questions

ECL, the Media, and Other Questions 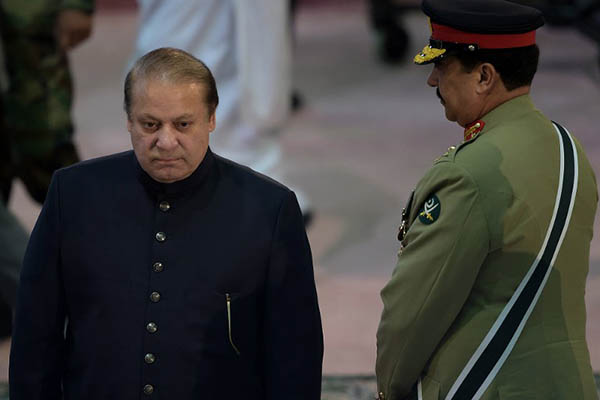 The government’s ham-fisted attempt to deny a report about a high-level meeting between civilians and the military has raised more questions than it has answered.

On Oct. 6, Dawn, Pakistan’s oldest English-language newspaper, published a story by the newspaper’s assistant editor, Cyril Almeida, captioned, “Act Against Militants or Face International Isolation, Civilians Tell Military.” The story described the proceedings at an undisclosed, high-level meeting, chaired by the prime minister, and said: “In a blunt, orchestrated and unprecedented warning, the civilian government has informed the military leadership of a growing international isolation of Pakistan and sought consensus on several key actions by the state.”

The story, branded as an exclusive, talked about “two sets of actions” that were agreed to: one, “military-led intelligence agencies are not to interfere if law enforcement acts against militant groups that are banned or until now considered off-limits for civilian action” and two, the prime minister “has directed that fresh attempts be made to conclude the Pathankot investigation and restart the stalled Mumbai attacks-related trials in a Rawalpindi antiterrorism court.”

The meeting, we are told, began with a presentation from the foreign secretary who described the diplomatic environment as bleak unless Pakistan addressed the concerns of other states, including longstanding friend, China, in regard to the alleged use of some non-state actors. When the military rep asked the secretary what steps must be taken to avoid “isolation,” the secretary’s “reply was direct and emphatic: the principal international demands are for action against Masood Azhar and the Jaish-i-Mohammad; Hafiz Saeed and the Lashkar-e-Taiba; and the Haqqani network.”

Upon this the director-general of the ISI reportedly said that the government should arrest whoever it considers to be working against the country’s interest. That led to a reported exchange between the Punjab chief minister and DG ISI with the former saying that whenever civilian law-enforcement arrests activists of certain groups, “the security establishment…work[s] behind the scenes to set the arrested free.”

The story then says that the DG ISI “readily agreed to tour the provinces at the direction of the prime minister, issue fresh orders to ISI sector commanders and meet with provincial apex committees to chalk out specific actions that need to be taken in various provinces.”

In a nutshell, the story informs the readers that the prime minister “orchestrated” the meeting to give a clear message to the military that unless certain steps are taken vis-à-vis some national security agencies, Pakistan’s foreign relations will remain messy, and the DG ISI, representing the military, seemed to agree and would now be acting as directed by the P.M. in light of the decisions taken at the meeting.

In other words, this is a story that ends happily.

Come evening, the Prime Minister’s Office issued a rebuttal of the story, calling it a combination of “fiction and half-truths.” When the bit about half-truths added fuel to speculations about what was “fiction” and what “half-truth”, the PMO sent another clarification, dropping ‘half-truths’ in favor of ‘fabrication’.

The newspaper, as it details in its leader of Oct. 12, published both. However, by the third day of the publication of the story, the reporter, Almeida, tweeted to say that his name had been placed on the Exit Control List. That added to the reader traffic for the story as also to speculations about what was going on. In the meantime, trolls, defending the military, got into action and began a campaign against the reporter, questioning his motives, and decrying the story as an attempt to harm Pakistan’s national interest, a catch-all phrase, easily employed but nary defined in any concrete terms. The publication itself was attacked, with hashtags appearing against Dawn, a newspaper never associated with sensationalism. In fact, it is known more for being frustratingly cautious.

The campaign against Dawn and its reporter has since been roundly criticized by the media, civil society, and rights activists and organizations. The story about Almeida being put on the ECL has spread across the world with almost every major foreign publication carrying it with hyperlinks to the original Dawn story.

If the idea was to curb Dawn and its reporter, the non-strategy of going about it has exploded in the face of whichever genius decided to put Almeida on the ECL. Come to think of it, it is this idiocy that has played (and is playing) more in the hands of Pakistan’s adversaries than the original story that, in fact, had said nothing new. I might note here that this discussion has been going on for a while between the civilian and military enclaves and it has been hinted at often in reports and articles. The Dawn story, as noted, ended on a positive note.

While the ECL decision has come from the Interior Ministry, as an administrative action—incidentally, the higher courts in previous cases have limited the Ministry of Interior’s administrative prerogative on this count—military sources are reportedly working hard in the background to tell reporters that they did not ask for any such measure to be taken against the reporter, even as they [military] are deeply interested in finding out the source of the leak.

The deep irony of this demand should not be lost on anyone. By asking for the source of the leak, the military is indirectly corroborating a story whose sourcing could have been—and should be—an issue of discussion. Consider.

The story says: “The following account is based on conversations with Dawn of individuals present in the crucial meetings this week…All declined to speak on the record and none of the attributed statements were confirmed by the individuals mentioned. (emphasis added)”

Put another way, not only is the story based on “unnamed source(s)”, there is no attribution.

The story also says “military officials declined to comment.” That is fine but which military official or officials the reporter contacted and through what means is not disclosed. Normally, such a comment is sought on the record and through email or any other form of written correspondence, which the publication can cite. If there’s one such, the story does not mention it.

The publication itself said that “the story was verified, cross-checked and fact-checked.” How? Given that the report itself denies named source(s) and attribution, how did the publication verify, cross-check and fact-check the story and with whom? The only explanation is that the reporter (a) did not rely on a single source and triangulated the story with a second and third source and (b) gave his sources to his editor who then repeated the process of checking and verification.

The editor of Dawn, Zaffar Abbas, is a very seasoned journalist with long experience both as a reporter and an editor. Knowing him and his work personally, I will be hard-pressed to think of him as someone who will shoot from the hip. Yet, there are questions here, apropos of sourcing and verification, that can be asked. Abbas, having worked for the BBC, also knows that one of most contested areas in journalism relates to sourcing, especially anonymous sources. More so when there’s no documentation involved—i.e., an anonymous source that gives the reporter document(s) that can be verified or add weight to what’s been said without attribution.

I believe that the story—as also many other stories, big and small in our media—should beckon the spirit of some inquiry into these questions.

And yet, if the military is looking for the mole(s), the publication must have got it right, even as we debate the issue of sources and parse that requirement into a different category. What can be gleaned from what is known—and not much is known—it seems that the civilian government used the reporter and then threw him under the bus. Nothing new about that, either. Which is why reporters must ensure they don’t get burned.

Another interesting question relates to why someone on the civilian side would leak the proceedings, especially if we accept the story’s drift about the exchange and its result. If the civilian side did manage, rather amicably, to get the DG ISI to do as directed, leaking information would defeat the purpose and force the military to hunker down because of the embarrassment caused it—unless, the signal is meant for someone else.

If, on the other hand, this is part of the larger game of one-upmanship between the civilians and the military, it appears strange that the DG ISI, instead of presenting his case, simply conceded the point about the security establishment still hobnobbing with some groups.

Be that as it may, this is clearly a high-stakes game and as we go deeper into it in the coming days, it will become clear that the reporter was ancillary to the actual game—or a sideshow, if one prefers that.

such a pitiful situation…

Do you recon this news is more important than Kashmir issue so in a way India succeeded to divert attention from Kashmir issue and you all are partners in crime by promoting this news look how long comments you have made and I am sure under current circumstances it could have been avoided no wonder because people like you India still exercising his right on Kashmir, it is a matter of shame for all of us specifically for a writer like you.