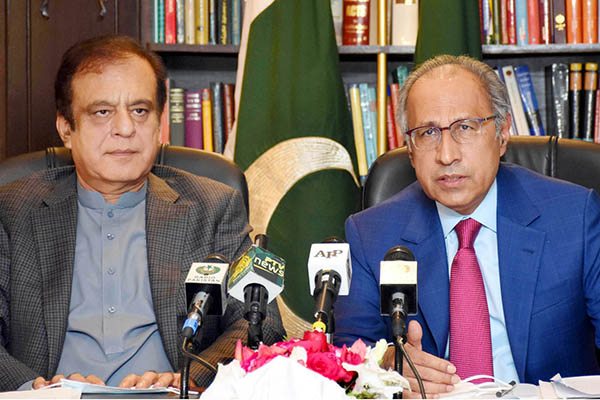 Adviser to P.M. on Finance says IMF mission expected to visit in a few weeks to get bailout program back on track

Adviser to the P.M. on Finance Abdul Hafeez Shaikh on Tuesday claimed there was “good news” on all external and internal economic indicators, adding that Pakistan was headed in the right direction.

Addressing a press conference alongside Information Minister Shibli Faraz, he stressed that it was vital to ensure these gains were protected from the impact of the coronavirus pandemic. “[We must] build on it,” he added.

Summarizing recent trends, Shaikh said that the large scale manufacturing sector had seen a 5 percent growth in the first four months of the current fiscal year, noting cement output had hit 16 to 20 million tons. Automobiles, fertilizer, and other sectors are also showing growth, he claimed. He claimed textile orders were available till December 2020, adding this was a major boost to exports.

According to the de facto finance minister, the rupee has also stabilized. He said its value had started to improve against the U.S. dollar, adding foreign exchange reserves had increased to $13 billion.

Shaikh said the Federal Board of Revenue had collected Rs. 1,340 billion in the past four months, claiming this was a 4 percent boost from its target and had come about despite the COVID-19 pandemic. He said the FBR had also cleared Rs. 128 billion in refunds in the same period.

He claimed the government had reduced its expenditures and had stopped borrowing from the State Bank of Pakistan. “The primary balance has been achieved in the first four months of the current fiscal year,” he said, claiming this would all eventually result in providing relief to the common man.

The adviser to the P.M. repeated the incumbent government’s claims that it had inherited $20 billion current account deficit, noting that it had been brought down to $3 billion last year and was sitting with surplus of $792 million this year.

He noted that due to debt servicing, the country had to continue with a budget deficit, claiming that the government was focused on increasing economic activity, creating jobs and providing maximum relief. As part of this, he noted, the government had decided to increase the beneficiaries of the Ehsaas Program from 4.5 million to 7 million, adding the government would provide them cash handouts on a permanent basis.

Admitting that inflation remained a major challenge for the incumbents, Shaikh said efforts were underway to control the prices of commodities, especially wheat and sugar. He said the government had imported wheat to overcome a shortage, and claimed it had now been brought under control. The information minister claimed wheat prices had started to decline. He said there were 4.2 million tons of wheat stock in the country currently, adding that this would be ramped up with a fresh infusion of 1.9 million imported tons.

He claimed that the next season would start with surplus wheat stock in April.

The adviser to the P.M. said the government had allocated Rs. 100 billion for the Kamyab Jawan Program for job generation. He also hailed the government’s construction package as being a driver of economic growth.

He said the first four months of the current fiscal has seen foreign direct investment of $733 million, adding the profitability of the country’s 100 biggest companies had gone up by 36 percent, while banks’ profits had spiked by 56 percent.

Shaikh also noted that the Pakistan Stock Exchange had been performing well, which he said was and indicator of growth. However, he warned, the ongoing second wave of COVID-19 posed serious risks to the economy and efforts should be taken to prevent any slowdown.

The finance adviser said a staff mission of the International Monetary Fund (IMF) was expected to reach Pakistan within a few weeks, adding that it would give a formal structure to ongoing discussions so the program could be brought back on track.

He said Pakistan had good relations with the IMF, claiming all issues were progressing as committed in the loan program, including better tax collection, reduction in government expenditures and timely debt repayments.

He noted that the government had availed certain relaxations to incentivize the construction sector in the wake of the COVID-19 pandemic, but stressed that the IMF was fully cooperating with Pakistan on these matters.