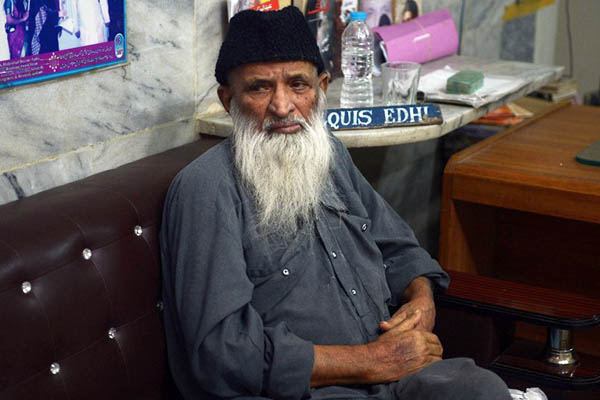 Philanthropist says he did not believe anyone would try to rob him, as even the Taliban have donated money to his charity.

Revered philanthropist Abdul Sattar Edhi on Tuesday said he was shocked and heartbroken over an armed robbery at his foundation’s headquarters in Karachi, adding that even the Taliban had donated money to the charity.

The octogenarian is one of Pakistan’s most-loved figures for his unstinting work in providing ambulance services across the country and running shelters for women, children and the destitute. He is also renowned for his modest lifestyle and is often spotted personally leading fundraising drives in bazaars throughout the country despite his age and increasing frailty.

But his reputation was not enough to prevent at least eight armed robbers from threatening him at gunpoint and holding several staff hostage Sunday night as they stole $400,000 in cash as well as five kilograms of gold.

“I am appalled and heartbroken as I had unshakeable confidence that no criminal would ever dream of robbing my charity,” a distraught Edhi told AFP from his office, which also houses his one-room home.

The diminutive figure, who has been on dialysis for the past year, was sleeping in his room and was woken at gunpoint by the robbers, who demanded the keys to the safe. He told the robbers he did not have the keys, which were held by his wife. The robbers then smashed the locks open.

Edhi recalled a previous brush with criminals when he was traveling on a highway in southern Sindh province in the mid-2000s. His vehicle was accosted by bandits but in the end he had nothing to worry about. “I muttered … that we don’t have any money and asked what they wanted from us,” he said. “But to my pleasant surprise they came to me and shook my hand and told me that they saw me and wanted to pay their respects.”

Even the Taliban donated some money to the charity when he was visiting Swat Valley, he added. “I was on the visit in Swat and adjacent towns in 2011 and sometime around midnight some Taliban came to me and offered me some cash donation,” he said. “So that was beyond my wildest imagination that someone would think about looting my charity.”

Police said they were examining the possibility of inside help and were hopeful of a breakthrough soon. “We are very close to solving the case and we are narrowing down the scope of our investigation,” said Zahid Hussain, the investigating police officer. Sources said that the police were focusing on one Edhi employee who had deleted the call record on his cellphone after the robbery was committed.