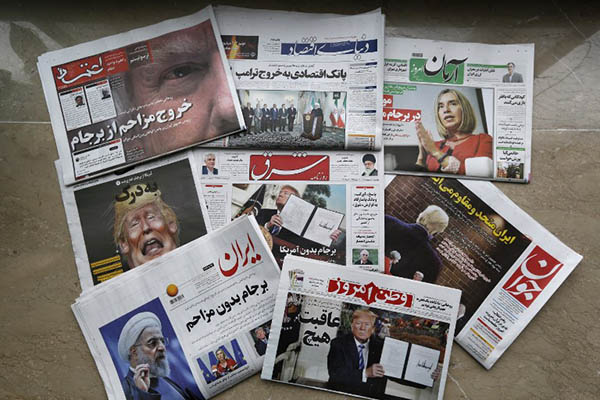 Following Trump’s withdrawal from the nuclear deal, Iran will wait and see how the chasm between Washington and its allies develops, especially on the issue of sanctions

President Donald Trump has pulled the United States out of the Joint Comprehensive Plan of Action (JCPoA), more commonly known as the Iran deal.

What remains to be seen now is (a) how the E3 will hold out, despite the joint statement put out by May, Macron and Merkel and (b) what Tehran will do in addition to burning the U.S. flag, which crowds in Iran have already done.

Unsurprisingly, Riyadh, Tel Aviv and Abu Dhabi have already endorsed Trump’s decision. All three were opposed to the deal, fearing that this will give a boost to Iran’s economy (which the lifting of sanctions did) which, in turn, will provide Tehran the space to play a more aggressive role in the Middle East.

Interestingly, the JCPoA, while being a very technical and comprehensive arrangement targeting Iran’s nuclear program, nonetheless did not address other aspects of Tehran’s policy in the region, whether in Iraq, Syria, Yemen or Lebanon.

Trump and his team, on the other hand, as also their allies, consistently focused on Iran’s ‘behavior’ not just in relation to its nuclear and missile development but also its broader, aggressive policy of having client governments and non-state groups in the Middle East.

One thing everyone could agree on: the JCPoA did not irreversibly cap Iran’s nuclear program. At best, it delayed it by 10 to 15 years. The idea seemed to be, and that still holds, that having a deal is better than not having a deal: i.e., by engaging Iran and getting it to sign on the dotted line—accepting a multilateral framework also underpinned by United Nations Security Council Resolution 2231—agreeing to extensive and intensive monitoring by the International Atomic Energy Agency and reciprocally lifting the weight of sanctions, the P5+1 will be creating space for Iran to continue with the arrangement.

A side benefit would be for the Iranian moderates to strengthen themselves vis-a-vis the hardliners when lifting sanctions will begin to benefit the Iranian street.

In a way, then, the JCPoA, while being narrow in a technical sense, did have a larger, perceived benefit in favor of the moderates in terms of its impact on the domestic debates in Iran. It is a matter of concern for the President Hassan Rouhani-Foreign Minister Javad Zarif duo that this move by Trump will give a fillip to the hardliners at home.

To recap: the JCPoA was essential to delay Iran’s strides toward nuclear weapons capability and it sought, indirectly, to influence Tehran’s behavior by strengthening the moderates which could tip the internal balance in favor of them and thereby impact Iran’s political and socioeconomic dynamics, as also its policy approaches within and beyond the Middle East.

The deal was good at doing the first, it wasn’t at doing the latter. The moderates might be, in fact are, fighting the hardliners for more space but that has less to do with how Tehran will look at the Middle East under the moderates and more to do with internal societal dynamics.

Put another way, how Tehran sees its place in the region—the Greater Middle East—is unlikely to change under the moderates. That is a matter of history and the collective consciousness of the Iranian people and civilization.

Tehran has a proactive, aggressive policy to extend its influence in the region and upstage Riyadh. The two countries have constantly sought to act as prima donnas and are fighting proxy wars in Iraq, Syria, Yemen and Lebanon.

Another issue is Iran’s missile program. Tehran insists that JCPoA doesn’t prevent it from testing missiles but that it [Tehran] will limit the range of its missiles to 2000km. A July 2017 poll conducted by Toronto-based IranPoll and University of Maryland and reported by The Washington Post showed that most Iranians considered the missile program off limits and were also overwhelmingly against renegotiating the deal. The problem is, one doesn’t develop medium- or intermediate-range missiles flying 2000km for a tactical target engagement. This remains an area of concern.

Meanwhile, the statement from E3 says that “It is with regret and concern that we, the Leaders of France, Germany and the United Kingdom take note of President Trump’s decision to withdraw the United States of America from the Joint Comprehensive Plan of Action.”

The statement further mentions that “Together, we emphasize our continuing commitment to the JCPoA. This agreement remains important for our shared security,” and “We urge all sides to remain committed to its full implementation and to act in a spirit of responsibility.”

Most importantly, the statement maintains that “we, the E3, will remain parties to the JCPoA” [and ensure] the continuing economic benefits to the Iranian people that are linked to the agreement.” (emphasis added.)

On Iran’s missile program, the E3 statement says that “we must also address in a meaningful way shared concerns about Iran’s ballistic missile program and its destabilizing regional activities, especially in Syria, Iraq and Yemen.”

Two things are clear: one, the E3 have signaled to Washington that they are not going to follow suit with sanctions against Iran. Also, more importantly, that Washington’s sanctions mustn’t interfere with E3’s economic relations with Iran. The French government has already said that it will ‘do everything’ to protect European companies working in Iran.

This will be interesting to see because of the U.S. legislative requirements that bind European companies and entities to U.S. domestic law.

Second, the E3, by referring to Iran’s missile program and its proactive outreach seek to address Washington’s concerns on these scores.

There’s much debate on the Saudi-U.A.E. approach to the question of JCPoA and Iran’s power outreach. The fact is that both states are reacting to Iran purely in terms of realpolitik, even as the rhetoric about the Muslim ummah continues to blind the faithful to the reality of the contest unfolding in the Middle East.

There’s nothing extraordinary about how the Saudi-U.A.E. duo is playing it.

Pakistan’s foreign ministry said in a statement that international treaties and arrangements are sacrosanct, and that “arbitrarily rescinding” them will “undermine confidence in the value of dialogue and diplomacy.” Pakistan appears to be supporting the E3 approach to upholding the JCPoA.

That’s a safe course of action, even though it is obvious that it is in Pakistan’s interest to have a non-nuclear Iran. Being sandwiched between a nuclear-armed neighbor in the East and a putative one in the West is not entirely an encouraging scenario.

Two final observations are important: Trump’s policy has pitted Washington against others. That isolationist approach will have its consequences. Iran, without any effort, has managed to effect a breach between Washington and its closest allies. This is in addition to the support it will get from Moscow and Beijing. The latter has already said it will “safeguard” the deal.

Iran could take one of the two approaches: get out of the JCPoA or play it with E3. It will most likely use the latter approach and wait and see how the chasm between Washington and its allies develops, especially on the issue of sanctions.

Meanwhile, there’s nothing to stop Iran from doing what it’s already doing with its IRGC and allied non-state actors. It might just become more proactive in Afghanistan. Several international outlets have reported on its support to the Afghan Taliban in recent years.

In all this, Saudi Arabia is likely to find itself to have played a bad hand.