Home Scope Egypt and the NGOs

Egypt and the NGOs 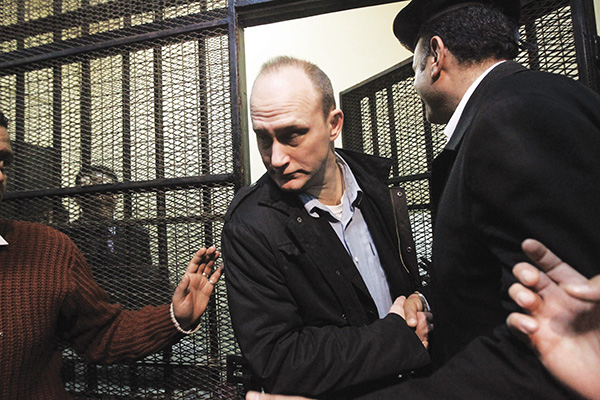 An American’s firsthand view of Cairo’s drift away from democracy.

For observers of international politics, it hasn’t been easy to figure out what to make of Egypt over the past few weeks. Whom, if anyone, should one be rooting for in a power struggle between two entities—the military and the Muslim Brotherhood—that seem to care little for democracy and human rights?

Perhaps no American has a more personal understanding of this complicated and grim situation than Robert Becker. Not long before the coup, Becker—a former employee of the National Democratic Institute, whose offices were raided by the authorities while the organization was monitoring Egypt’s first parliamentary elections—was convicted and sentenced by an Egyptian court to two years of hard labor. His crime: operating an illegal nongovernmental organization and receiving foreign funding. All the other American NGO workers in the same predicament opted to leave the country after they were charged, but Becker—in a show of solidarity with Egyptian colleagues who were also facing charges—stayed for his trial.

Becker did eventually leave Egypt on June 4, hours after the judge pronounced the sentence. A month later came the coup—and with it, a host of questions about where the country is headed. When Newsweek spoke with Becker recently, he seemed as torn as many other observers about which side in Egypt’s current power struggle—the military versus the Muslim Brotherhood—represents the greater threat to democracy.

“Ninety-nine out of 100 times I would be against a military coup against a democratically elected government,” he said. “But I cannot defend Morsi, having watched him not even pretend to care about democracy for a year since he was elected.”

This view is, in some ways, informed by Becker’s own experience as a target of prosecution. When he was first charged, Egypt was still being run by a transitional government beholden to the military. But during this period, the Muslim Brotherhood had begun to campaign against foreign NGO workers like Becker.

Then, when Mohamed Morsi finally took power, his government proposed a law that would require a national-security committee to approve all NGO activities in Egypt.

The irony of all of this is that when Becker first arrived in Egypt in 201l, he trained all political parties, including the Muslim Brotherhood, in the art of field organizing and fundraising.

Becker now has a few weeks to decide whether he will return to Egypt and fight his conviction. But he is most concerned about the 15 Egyptians who have been found guilty of the same crimes. Three of them have left the country and face immediate arrest if they return home. “The U.S. government and the American NGOs involved in this need to make overturning these convictions an absolute priority,” he said. “The future of Egypt’s civil society depends on it.”