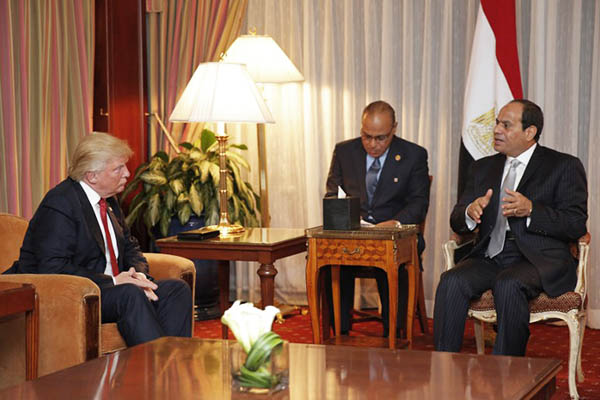 Trump accused the media on Monday of disregarding attacks by radical jihadists, in a provocative statement for which he provided no evidence. In Cairo, a statement by foreign ministry spokesman Ahmed Abu Zeid “hailed the U.S. administration stance” criticizing “the Western media’s coverage of some terrorist attacks around the world.”

He said his statement addressed “the White House release of a list of 78 terror attacks [9 of which were in Egypt] which Western media ignored in a clear bias.”

Trump accused the media of downplaying the threat that his administration cites to justify its ban on travelers from seven Muslim majority states.

Speaking during a visit to U.S. Central Command in Tampa, Florida, Trump listed a string of attacks in the United States, including 9/11, the Boston Marathon bombings, the Orlando gay nightclub massacre and the San Bernardino shootings. “You have seen what happened in Paris and Nice. All over Europe it’s happening. It’s gotten to a point where it’s not even being reported,” he said. “And in many cases the very, very dishonest press doesn’t want to report it.”

Although he failed to provide evidence of this, the White House later distributed a list of 78 attacks it said were “executed or inspired by” the Islamic State group, saying most failed to receive adequate coverage but without specifying which.

On Monday, the Egyptian foreign ministry statement said: “Accusations and the finger of blame were pointed at others [like Egypt] after terrorist attacks… which some Western media portrayed as a security failure on the part of the government.” It cited Western media coverage of the downing of a Russian passenger plane in the Sinai on Oct. 31, 2015, killing all 224 people on board.

I.S. said it had smuggled a bomb onto the aircraft, and Russia said an investigation found it was brought down by a bomb. The ministry also cited coverage of a suicide bombing that killed 29 Christian Copts at a Cairo church on Dec. 11, sparking Coptic protests.

Jihadists in Egypt have killed hundreds of soldiers and policemen since the military overthrew Islamist president Mohamed Morsi in 2013, unleashing a bloody crackdown on his supporters. The jihadist I.S. group’s Egyptian affiliate operates mostly in the northern Sinai, although attacks have also taken place elsewhere, including in Cairo.

Abu Zeid on Monday expressed the hope that “the next phase will witness an essential shift in the way the international community deals with the phenomenon of terrorism.”

Egypt-U.S. relations were fraught under former president Barack Obama amid disagreements over a rights crackdown, but Trump is expected to seek better ties.

Washington’s annual $1.3 billion in military aid was briefly suspended under Obama in 2013 after Morsi’s ouster, but was fully reinstated in 2015. White House spokesman Sean Spicer said on Jan. 23 that Trump is committed to providing military aid to Egypt.