Egypt Detains Over 1,000 After Anti-Sisi Protests 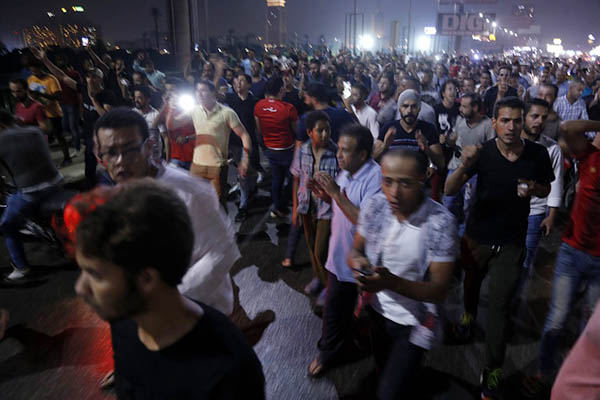 NGOs say authorities have ramped up their crackdown, which comes ahead of a ‘million-man march’ called for Friday

Egyptian authorities have arrested over 1,000 people, rights groups said on Wednesday, broadening a crackdown that has seen prominent critics detained after rare protests calling for the ouster of general-turned-President Abdel Fattah al-Sisi.

The wave of arrests comes ahead of a “million-man march” on Friday called for by an exiled businessman whose online videos accusing Sisi and the military of corruption sparked last week’s rallies.

The high profile dissidents detained include Khaled Dawoud, a former leader of the liberal Al-Dostour party who appeared in front of state prosecutors on Wednesday, his lawyers confirmed. He was charged with disseminating fake news and joining a terror group, and was remanded in custody for 15 days, they added. Dawoud will be tried as part of the same case as award-winning human rights lawyer Mahienour El-Massry and veteran labor union activist Kamal Khalil, both of whom were arrested over the past week, the lawyers said.

A well-known politician and journalist, Dawoud is a senior member of a broad coalition of leftist and liberal opposition parties that called on Tuesday for a “national dialogue” with authorities. The alliance, known as the Civil Democratic Movement, urged authorities to release all those arrested since the sporadic protests broke out.

Two prominent academics are also among those detained, according to a lawyer and relatives. Hazem Hosny, a Cairo University political science professor, was arrested on Tuesday night in front of his home, his lawyer Tarek al-Awadi said on Facebook. French-educated Hosny was a spokesman for former Egyptian military chief of staff Sami Anan, who was detained after he attempted to run against Sisi in presidential elections last year.

The professor has been critical of Sisi on social media in recent days.

In July 2013, Sisi led the military ouster of Muslim Brotherhood president Mohamed Morsi. Demonstrations have since been effectively banned under an anti-protest law passed the same year. The growing list of those detained also includes three journalists held for their coverage of the protests.

Authorities on Wednesday had not yet publicly commented on the high-profile arrests.

On Monday, U.S. President Donald Trump hailed Sisi as “a great leader” who had restored “order” to Egypt, during a meeting at the U.N. in New York ahead of this week’s General Assembly meeting.

Since last week, authorities have stepped up the security presence in Cairo and other cities. On Tuesday, AFP journalists saw police frisking pedestrians near the capital’s iconic Tahrir Square, the epicenter of the 2011 revolution, which toppled long-time autocrat Hosni Mubarak. Security forces also checked the mobile phones of passersby.

Last week’s protests followed an appeal by Mohamed Aly, an exiled Egyptian businessman living in Spain, to unseat Sisi after accusing him of corruption in a series of videos that went viral on social media. Security forces, apparently caught by surprise, responded by firing tear gas and rubber bullets in cities such as Suez to disperse the protesters.

Aly has called for a “million-man march” on Friday, labeling the unrest “a people’s revolution.” The government’s foreign media accreditation body released a statement late Saturday warning international journalists that their reporting “should not be exaggerated,” without explicitly mentioning the protests. Egypt has also come under fire from rights groups for disrupting internet access to the popular Facebook messenger mobile app and news sites such as the BBC.