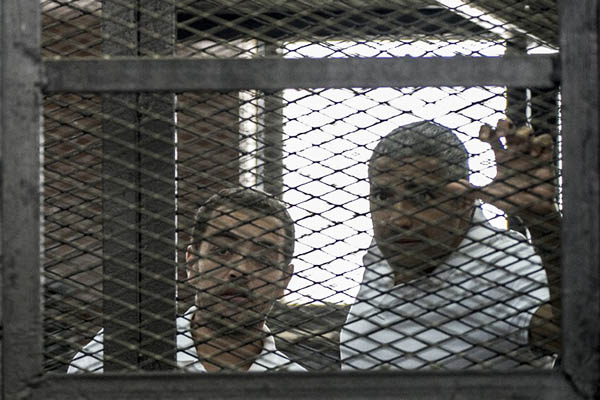 Appeals court has ordered retrial, saying the prosecution has failed to prove its case.

An Egyptian court on Thursday ordered the release of two Al-Jazeera journalists pending their retrial for allegedly supporting the banned Muslim Brotherhood.

Canadian Mohamed Fahmy was ordered to pay bail of 250,000 Egyptian pounds while Egyptian Baher Mohamed was released on his own recognizance along with other defendants. The case was adjourned until Feb. 23.

“I AM FREE,” read a message on Mohamed’s Twitter account following the release order, which came during the first hearing in the retrial. Along with Australian colleague Peter Greste, the two journalists had been sentenced to up to 10 years in prison in a case that sparked global outrage. An appeals court ordered a retrial saying the prosecution had failed to prove its case.

Greste was freed and sent home earlier this month under a law passed last year allowing foreigners to be deported to their home countries to stand trial or serve out their sentences. He welcomed the release of his colleagues.

“This is a huge step forward. Not time to declare it over, but at least you get to go home!” he wrote on Twitter.

The three journalists of Qatar-based Al-Jazeera were arrested in December 2013 and charged with spreading false news about Egypt and supporting the Muslim Brotherhood. The charges came against the backdrop of strained ties between Egypt and Qatar, which supported ousted president Mohamed Morsi.

The case has been a major source of embarrassment for Egyptian President Abdel Fattah al-Sisi as he seeks to shore up international support following a widely condemned crackdown on the opposition.