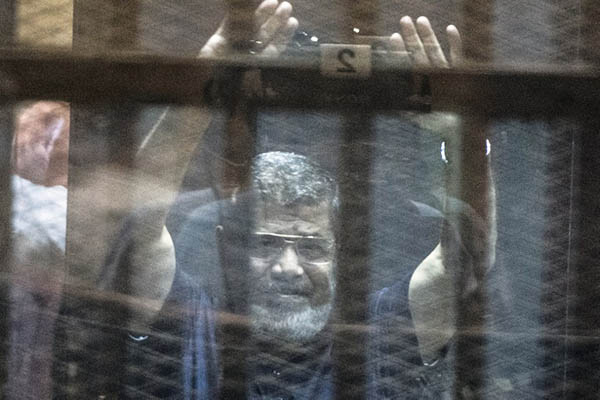 Over 100 defendants sentenced to death over jail breaks during the ‘Arab Spring’ uprising of 2011.

An Egyptian court sentenced deposed Islamist president Mohamed Morsi and more than 100 other defendants to death on Saturday over jail breaks during the 2011 uprising.

Morsi, sitting in a caged dock in the blue uniform of convicts having already been sentenced to 20 years for inciting violence, raised his fists in defiance when the judge read out his verdict. Among the others sentenced to death were Mohamed Badei, the leader of the Muslim Brotherhood who had already been handed the death penalty in another trial, and his deputy Khairat al-Shater.

Morsi, the country’s first democratically elected president, had ruled for only a year before mass protests prompted the military to overthrow him in July 2013. He and dozens of other Islamist leaders were then detained amid a crackdown that left hundreds of his supporters dead. Many of those sentenced on Saturday were tried in absentia, including prominent Islamic cleric Yusuf al-Qaradawi who resides in Qatar.

Under Egyptian law, death sentences are passed on to the mufti, the government’s interpreter of Islamic law, who plays an advisory role. The defendants can appeal even after the mufti’s recommendation. The court will pronounce its final decision on June 2.

Morsi was spared the death sentence in the first of two trials that concluded on Saturday, in which the court advised death sentences for 16 defendants on espionage charges. They had been charged with colluding with foreign powers, the Palestinian Hamas and Iran to destabilize Egypt. The court will pronounce the verdicts for Morsi and the remaining 18 defendants in that trial at a later date.

The court then delivered its verdict in the other case, in which Morsi and 128 defendants were accused of plotting jailbreaks and attacks on police during the uprising that overthrew president Hosni Mubarak in 2011. More than 100 were sentenced to death along with Morsi.

Many of the defendants are Palestinians alleged to work with Hamas in neighboring Gaza, and were tried in absentia along with a Lebanese Hezbollah commander. They were alleged to have colluded with Morsi’s Muslim Brotherhood to carry out attacks in Egypt in what prosecutors allege was a vast conspiracy.

With this verdict, Morsi and other former opposition members have been condemned for violence during the anti-Mubarak uprising, while Mubarak himself beat charges in a trial over the deaths of anti-government protesters during the 18-day revolt that toppled him.

Morsi was in prison when the anti-Mubarak uprising started on Jan. 25, having been rounded up with other Brotherhood leaders a few days later. On Jan. 28, protests fueled by police abuses targeted torched their stations across Egypt, prompting thousands of prisoners to escape when the police force all but collapsed.

Since Morsi’s overthrow, the police force has largely been rehabilitated in public opinion, with government officials and loyal media blaming the Brotherhood and foreigners for the violence of the anti-Mubarak uprising. The army chief who overthrew Morsi, Abdel Fattah al-Sisi, is now president after having won elections last year. He has pledged to eradicate the Brotherhood, once the largest political movement in the country.