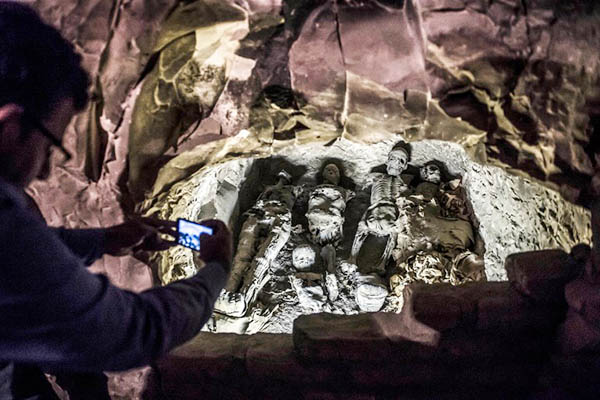 Archaeologists discover eight mummies from over 2,300 years ago, three in ‘good’ condition

Egyptian archaeologists have discovered eight mummies dating back over 2,300 years at a pyramid complex south of Cairo, authorities said on Wednesday.

“The Egyptian archaeological mission working at the south eastern area of King Amenemhat II’s pyramid in Dahshur Necropolis has uncovered a number of ancient burials with eight coffins,” the antiquities ministry said in a statement.

The mummies, dating from the Late Period of ancient Egypt, are “covered with a layer of painted cartonnage in the form of a human,” the statement said. “Three of them are in good condition.”

Cartonnage, a material often consisting of a mixture of linen or papyrus and plaster, was frequently used to cover mummies.

The ministry said it planned to eventually put the mummies and the limestone sarcophagi they were found in on display at museums set to be built in the resort hubs of Hurghada and Sharm el-Sheikh.

The Dahshur complex, some 30 kilometers south of Cairo, was a major royal burial site that boasts the well-known “bent pyramid” of King Snefru.

In April 2017, the remains of an Egyptian pyramid built around 3,700 year ago were discovered at the complex.