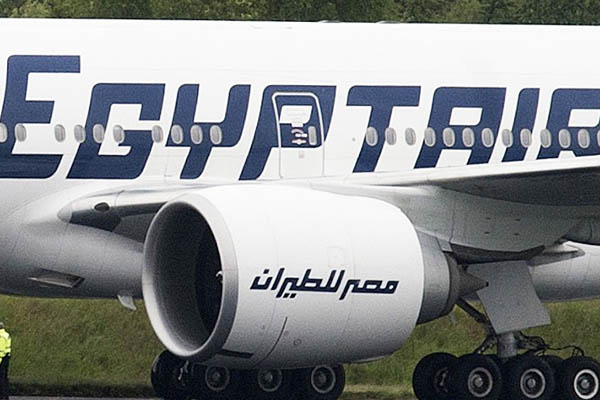 Egyptian search teams combed the Mediterranean for signs of an EgyptAir flight with 66 people on board that vanished from radar en route from Paris to Cairo on Thursday, the airline said.

There were 56 passengers, seven crewmembers and three security men on board the Airbus A320, EgyptAir said, adding that the passengers included a boy and two babies.

The Egyptian military said it had deployed search aircraft and naval vessels to locate the plane, in cooperation with Greece.

A tweet on the airline’s official account said flight MS804 left Paris at 11:09 p.m., “heading to Cairo [and] has disappeared from radar.” Further tweets in Arabic said contact was lost at 2:45 a.m. Cairo time, when the plane was just inside Egyptian airspace and at an altitude of 11,000 meters.

The airline said in a statement that Egyptian military search and rescue teams were combing the area where the jet might have gone down. In a subsequent statement, the airline said the military had detected a distress message from the missing plane at 0226 GMT, less than 10 minutes before the flight disappeared.

An EgyptAir official said the search was focused on an area of sea north of the Egyptian coast, without providing a precise location.

The flight from Paris Charles de Gaulle airport to Cairo normally takes just over four hours and the plane was due to arrive at 3:05 a.m.

EgyptAir said the plane had been manufactured in 2003.

EgyptAir hit the headlines in March when a flight from Alexandria to Cairo was hijacked and forced to divert to Cyprus, where the “unstable” hijacker demanded to see his ex-wife. He had claimed he was wearing an explosive vest, which turned out to be fake, and handed himself in within hours after freeing the passengers and crew.

In October, the Islamic State jihadist group claimed responsibility for bombing a Russian airliner flying home holidaymakers from the Egyptian resort of Sharm El-Sheikh, killing all 224 people on board. The group said it had smuggled a bomb concealed in a soda can on board the plane at Sharm El-Sheikh airport.

The disappearance of the jet on Thursday comes more than two years after the start of one of the most enduring mysteries in aviation history.

Malaysia Airlines Flight MH370 vanished on March 8, 2014 en route from Kuala Lumpur to Beijing with 239 passengers and crew on board, mostly Chinese and Malaysians. Authorities believe the Boeing 777 detoured to the remote southern Indian Ocean and then plunged into the water.