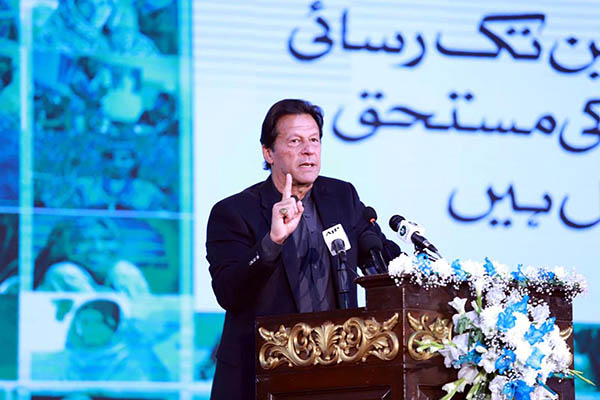 The launch of the Ehsaas Kafaalat Program lays the foundation of Pakistan becoming a welfare state, Prime Minister Imran Khan said on Friday.

Addressing the inauguration of the scheme, which will provide a monthly stipend of Rs. 2,000 to seven million poverty-stricken women through a biometric-enabled cash disbursal mechanism, Khan said that the incumbent government’s policies would soon transform Pakistan into the country envisioned by Quaid-e-Azam Mohammed Ali Jinnah and Allama Iqbal.

Under the program, each beneficiary would be provided a bank account as well as a smartphone to empower women through economic and digital inclusivity. “The smartphones would help educate the children of the poor women from. This will bring about a new revolution,” Khan said, adding the government planned to launch another program under the Ehsaas umbrella to transfer assets to women such as cows and chickens to help them secure an independent livelihood.

Congratulating Sania Nishtar, the special assistant to the P.M. on poverty alleviation and social protection, on successfully launching the scheme, Khan noted that she had worked under immense pressure, as the government wanted to utilize the Rs. 200 billion it had allocated for its anti-poverty initiative without delay. He lauded her for developing a system based on data analytics to ensure that the government’s assistance reached only deserving citizens.

The prime minister said no anti-poverty initiative could succeed unless it was transparent. He said the beneficiaries of the Kafaalat program would also be able to benefit from the government’s upcoming ration scheme and other initiatives.

According to Khan, the PTI government is undertaking several initiatives, including scholarships for students, youth skill training and a start-up loan program, that are designed to uplift the poor.

In her speech, Nishtar compared the Kafaalat Program to the Benazir Income Support Program, noting the latter was a standalone program that had been utilizing a 10-year-old database. She said the BISP had relied on quarterly payment systems and paper-based surveys unlike Kafaalat, which aimed to provide monthly assistance. All the beneficiaries have been identified through a door-to-door digital survey, plus data analytics, desk and web surveys, she added.

She said the Kafaalat Program allowed impoverished people to avail government assistance on demand, as they did not have to wait for 10 years to enlist themselves in the poverty survey. She said one million families in 70 districts would start receiving stipends from February or March this year; other districts would be added by the end of the year.

In addition to Nishtar and the P.M., Special Assistant to the P.M. on Information Firdous Ashiq Awan, other cabinet members, parliamentarians, and diplomats attended the event.