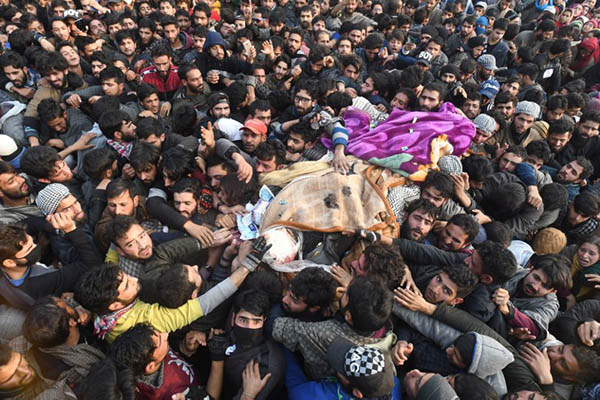 Eight people were killed on Sunday in violence in India-administered Kashmir, capping off one of the deadliest weeks this year in a region already suffering its worst bloodshed in a decade.

Kashmir-based rights monitors say 528 people have died this year from armed conflict in the disputed Himalayan territory claimed in full by both India and Pakistan, including 145 civilians.

It is the deadliest year since 2009, said the Jammu Kashmir Coalition of Civil Societies, underscoring a worsening security situation in the Muslim-majority region controlled by India and half a million of its troops.

Police said on Sunday that six alleged militants and a soldier were killed in a shootout in Shopian, a southern district of the Kashmir Valley. A civilian was also killed when Indian forces fired shots into a crowd of protesters that gathered near the scene of the shootout, senior police official Munir Ahmad Khan said.

Elsewhere in Kashmir 10 suspected militants and four others—including a teenage girl and a prominent separatist activist—were gunned down in separate clashes, taking the week’s total death toll to 22.

Police said the activist was killed by rivals but separatist leaders said the government orchestrated his assassination.

The police official, Khan, said the high number of casualties in 2018 was the result of “good actionable information” leading them to armed rebels and their hideouts. But critics said Indian forces were escalating tensions in the restive region ahead of general elections next year in order to look tough on Pakistan and militancy.

“Dead bodies of Kashmiris unfortunately sell well in Indian elections,” said Khurram Parvez, program coordinator at the Jammu Kashmir Coalition of Civil Societies. “The mindset dominant in India now is that by escalating violence, the people of Kashmir will be pressured to surrender.”

The U.N. human rights chief, in a first-of-its-kind report in June, called for a major investigation into abuses in Kashmir and the “chronic impunity” for violations perpetrated by troops there. The findings accused Indian troops of 145 unlawful killings, far surpassing the 20 people estimated to have been killed by militant groups over the study period.

New Delhi rejected the report, blasting it as “fallacious.”

India has long accused Pakistan of arming rebel groups in Kashmir, which has been split between the rivals since 1947. Rebel groups have long waged an armed insurgency against Indian forces in Kashmir, demanding an independent state or merger with Pakistan.