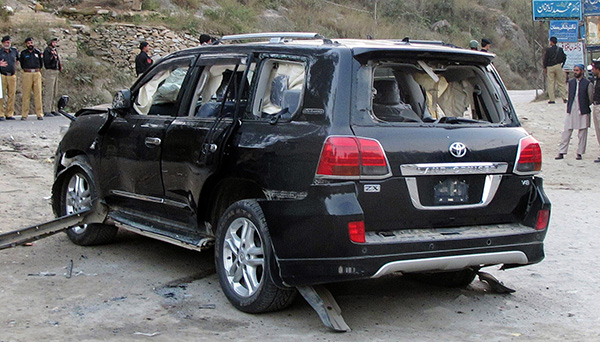 Mohammad Ibrahim Jatoi was campaigning in Sindh when a suicide bomber targeted him.

An election candidate escaped injury on Wednesday after a suicide bombing in southern Pakistan left two people wounded, police said, in the latest in a wave of attacks to hit the campaign.

The attack came in southern Shikarpur district of Sindh province, some 400 kilometers northeast of Karachi, when Mohammad Ibrahim Jatoi, a candidate for the National Assembly in the May 11 polls, was on the campaign trail.

“A suicide bomber on a motorcycle blew himself up near the car of Jatoi, but he was unharmed,” said local police station chief Zaheer Mahesar. Only the bomber died in the blast.

Jatoi, from the small National People’s Party, was returning from campaigning when the bomber targeted him at a toll collection point, Mahesar said, adding that two passersby were wounded. “We have found arms and head of the suicide bomber,” he said.

District police chief Ghulam Azfar confirmed the suicide attack and said that up to six kilograms of explosives were used in the device. No group has claimed responsibility for the blast yet.

Taliban Claim Another Bombing in Kabul