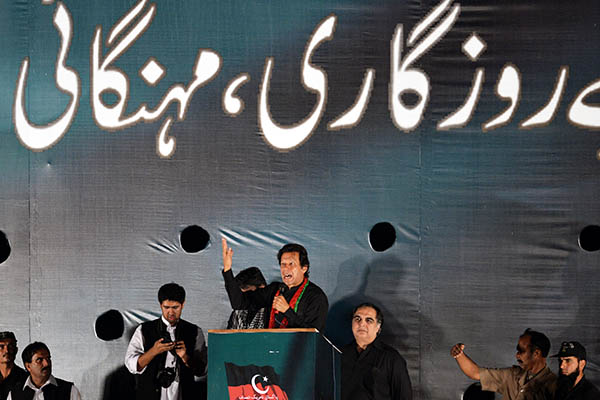 PTI chief says he launched protest because he was ‘bored’ by country’s political state.

Thousands of Pakistan Tehreek-e-Insaf (PTI) supporters attended a rally in Islamabad on Sunday protesting against alleged rigging in last year’s general elections, amid simmering tensions between the government and Army.

The demonstration was led by cricketer-turned politician Imran Khan, who was joined by Canadian preacher Tahir-ul-Qadri, who held an anti-corruption march last year prior to the May 2013 elections that saw the country’s first democratic handover of power. Critics have accused the protest leaders of undermining the civilian government led by Prime Minister Nawaz Sharif at a time when relations with the Army are at a low.

An estimated crowd of around 25,000 from around the country, particularly the Khyber-Pakhtunkhwa province governed by Khan’s party, demonstrated in front of Parliament.

Addressing the protesters, Khan lashed out at the government for its alleged role in rigging the 2013 parliamentary elections, disputing the outcome in four constituencies. He also called for the election commission to resign, and railed against power shortages and inflation.

Sharif’s Pakistan Muslim League-Nawaz swept to power last year with 190 of Parliament’s 342 seats, while the Pakistan Peoples Party (PPP) came second with 45 seats. Khan’s PTI trailed in third with 34 seats and the four contested constituencies would not have affected the overall election result.

“We demand the election commission to immediately resign because the nation has no confidence in them,” Khan said. “The government has accused me of attempting to derail democracy, but how can it claim of democracy with a fake mandate?” he added, to roars of approval and applause. Khan told his supporters he had campaigned for change in the country and had decided to launch this protest because he had become “bored” of the political situation in the country.

The protest comes at a period of high tension between the military and civilian government stoked by the treason trial of former president Pervez Musharraf, the government’s decision to negotiate with the Taliban and differences over how to deal with rival India.

During the rally, both Khan and Qadri also backed the military in its push to shut down Geo News after it aired allegations accusing Pakistan’s main spy agency of attempting to assassinate anchor Hamid Mir.

Khan also informed his supporters that his party would continue protesting against election rigging across the country until its demands had been met. “We will convene in Faisalabad on May 23 for the next phase of this dharna,” he told the demonstrators.