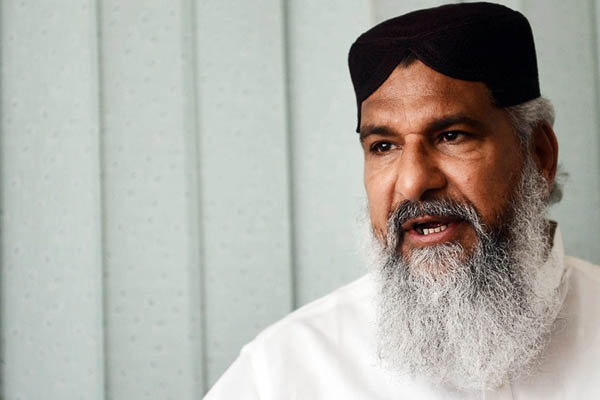 Tribunal disqualified PMLN leader Shaikh Akram, who has said he will challenge the decision in the Supreme Court.

The head of a group banned by the government as a terrorist organization has won a seat in Parliament following an election tribunal’s decision, officials said Thursday.

Maulana Ahmad Ludhianvi, who leads the sectarian Ahl-e-Sunnat Wal Jamaat (ASWJ), won an appeal after losing the seat at Jhang in the Punjab province during last May’s general elections.

The hardline Sunni Muslim ASWJ is widely seen as a front for Sipah-e-Sahaba Pakistan, a group formed in the 1980s and responsible for murdering hundreds of Shia Muslims whom they consider heretics. The interior ministry banned ASWJ as a terrorist group in 2012, but it operates freely in Pakistan and its banners are frequently seen at rallies.

Ludhianvi ran on the ticket of the six-party religious alliance Muttahida Deeni Mahaz (United Religious Front), which did not win a seat in the May 2013 vote.

Shaikh Mohammad Akram of the Pakistan Muslim League-N party, which came to power nationally in the elections, won the ballot in Jhang. But the tribunal disqualified him for rigging the vote and defaulting on a loan. “A tribunal gave its decision yesterday and de-seated the winner Shaikh Mohammad Akram and declared Maulana Ludhianvi the winner, who was the runner up in the election,” said Mehboob Anwer, election commissioner for Punjab.

Younas Qasmi, a close aide to Ludhianvi, said the workers of his organization were elated after hearing the decision and distributed sweets in the city to celebrate the victory. He said Ludhianvi had appealed against Akram because he was a loan defaulter who cannot contest elections under the law and had also rigged the election.

Akram said he would challenge the tribunal’s ruling in the Supreme Court.

ASWJ is known as the political arm of Lashkar-e-Jhangvi, one of the most active terror groups in Pakistan and responsible for a string of bloody attacks on Shias.

Ahead of last year’s elections Ludhianvi said he wanted to be elected so he could spread what he called his “anti-Shia mission” to a national audience. Shias make up around 20 percent of Pakistan’s population, which is largely Sunni.

A CLEAR CHOICE BETWEEN A TERRORIST MUNAFIQ AND A THEA F,WHAT HAS PAKISTAN COME TO IS THAT ALL WE GOT?

THERE WERE NO SUNNI OR SHIA OR WAHABI DURING PROFITS TIME ,SO ANY BODY TALKING ABOUT SUNNI WAHABI AND SHIA NOW IS A CLEAR MUNAFIQ ,DWELLER OF BOTTOM HELL.

Boiled down it comes to a choice for people in Jhang to vote for a fraudulent degree holder or his bank defaulting relative or the leader of an alleged hate cult responsible for mass murders!
Other potential challengers have been publicly warned off by ASWJ not to stand in the way of Ludhianwi and are wisely abstaining from raising their heads over the parapet.
Until our justice system actually protects the weak, the State takes on its unbiased role to prosecute illegality, these travesties of Democracy and Justice will remain the norm.
Or perhaps this system of government should be discarded in favour of a system in which equal rights are part of the design?
At present a weak, poor or sick person who is unable to “pursue” his case by paying/influencing Police and lawyers is denied any justice while bullies are in control.