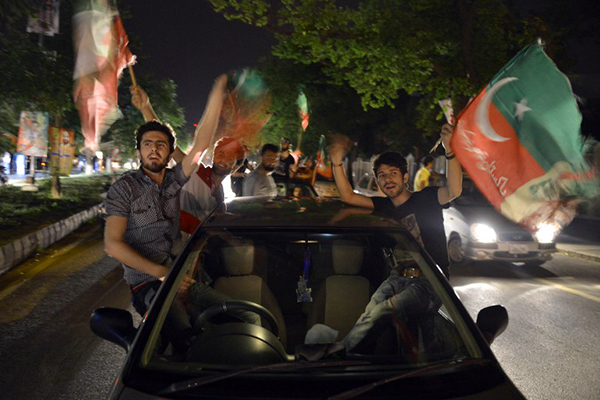 Despite some irregularities and violence at the polling stations, Pakistan’s May 11 elections were “relatively fair,” the Free and Fair Election Network said on Sunday.

FAFEN, an alliance of 42 civil society organizations working on democracy and election monitoring, praised the Election Commission of Pakistan for a smooth voting process. It said voters defied direct threats of violence from the Taliban and queued up at polling stations to produce “a relatively high turnout and public enthusiasm.”

“We observed the May 11 elections through 41,000 observers across the country and have received reports from 3,500 polling stations so far,” said Zahid Islam, chairman of FAFEN. “According to reports so far, 693 irregularities were recorded at 3,500 polling stations out of which up to 40 events were of illegal and fraudulent voting.”

About 36 polling stations and booths were illegally occupied, 121 observers were not allowed to work, and 30 were beaten up, FAFEN said. “PMLN workers beat one of our observers in Jhelum, and [Muttahida Qaumi Movement] assaulted one in Karachi who had to be hospitalized,” said Islam.

The network also said that a significant number of women had not been allowed to vote in Khyber-Pakhtunkhwa, Balochistan, central Punjab, and southern Sindh.

The Election Commission has ordered a revote in 43 polling stations in one Karachi constituency, NA-250, over allegations of ballot stuffing. The commission says nearly 60 percent of Pakistan’s 86.2 million registered voters cast their ballots on Saturday, the highest turnout since the controversial 1977 elections. Turnout was 44 percent for the 2008 elections.

“Nearly 60 percent of people took part in the voting process,” Chief Election Commissioner Fakhruddin G. Ebrahim told reporters in Islamabad. “The percentage of voting is very high and it is a demonstration of people’s power,” Ebrahim said, praising the authorities, the military, and law enforcement agencies for cooperation “which enabled us to hold free and fair elections.”

On Twitter, TV talk show host and caretaker chief minister of the Punjab, Najam Sethi, praised himself for “conducting the most neutral, fair, and nonviolent elections in the history of Pakistan!” He said this had been acknowledged by “all local and foreign observers.”

Not everyone agrees. In a video message from his hospital bed after his fall on May 7, Imran Khan said on Sunday that his Pakistan Tehreek-e-Insaf would, “God willing,” issue a “white paper” detailing instances of voting irregularities that suppressed the vote for his party.

The election czar, Ebrahim, says his office is also looking into these allegations. “We are examining it in detail, and we will take action.”