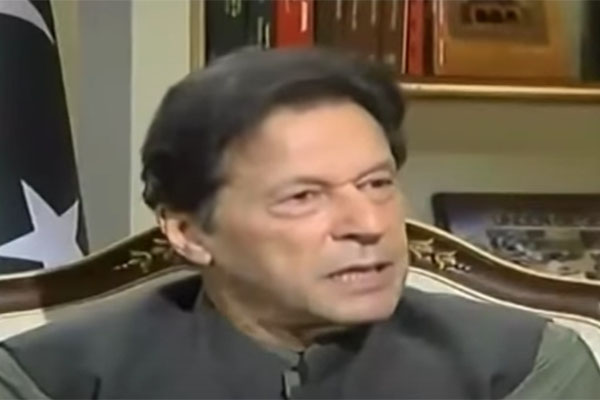 Pakistan is in the grips of an “elite capture,” Prime Minister Imran Khan said on Tuesday, claiming that the small but powerful lobby had been trying to overthrow his government for the past two years.

“The elite class considers itself above the law. When NAB [National Accountability Bureau] calls them, they say the country is ruined,” he told senior anchor Kamran Khan during an interview to mark the Pakistan Tehreek-e-Insaf’s two years in power. “That is why the elite class has been in a cycle of trying to overthrow the government for the past two years,” he said, claiming that his government was the first that had tried to bring them under law.

Khan said the past two years had been among the toughest of his life, as Pakistan was facing challenges from multiple fronts. “My entire life has been a struggle,” he said, summarizing his rise from a cricketer to a prime minister. “Politics was the biggest struggle,” he said, adding that over time he had learned to cope with the pressure. “What happens is that when people don’t struggle for something, they become worried when there are ups and downs and give up,” he said, adding that it was only through adversity that progress could be achieved.

“[When we came into power] the country’s economy had crashed, we were defaulting on payments, we didn’t have money to pay our debts … There was no one place to concentrate on,” he said, noting that he had spent the past two years understanding the challenges facing the country so his dream of a welfare state could be realized.

“Today if you ask me what I have tried to do, I will say I have tried to put the country on the path to becoming a welfare state. If we want to progress, we have to go back to that model,” he said.

To a question about Israel, and the U.A.E. seeing to normalize relations with it, the prime minister said he could not accept it. “Our position on Israel is very clear. Pakistan can never recognize Israel. If we surrender to Israel, then we must leave Kashmir. We also have to answer to Almighty Allah about Israel and Palestine,” he added.

Conversely, Khan said that China was a longstanding partner of Pakistan and their future was tied together. “We are further strengthening our ties with China,” he said, adding that China also needs Pakistan. “Unfortunately, Western countries are using India against China,” he said.

To a query on Saudi Arabia, ties with which have become strained following Foreign Minister Shah Mehmood Qureshi’s criticism of its stance on Kashmir, the prime minister said Pakistan did not wish to divide the Muslim world. He said Saudi Arabia had its own foreign policy and claimed news of breakdown in ties was completely baseless. Saudi Arabia has helped Pakistan in every difficult time, he stressed. On Pakistan’s ties with the U.S., Khan said that the two had become partners in peace.

Commenting on Pakistan’s success in curbing the spread of the novel coronavirus, Khan said he had always differed with imposing a complete lockdown in the country. “Pakistan’s situation is not like that of Europe,” he said, reiterating that the daily wagers in the country could not afford any kind of movement restrictions. “I was attacked, [by opposition and cabinet members], with people saying I didn’t understand the threat and was ruining the country,” he said, but noted that the lowest segment of society had been protected.

Pointing to neighboring India, Khan said that it had imposed a total lockdown that had resulted in a spike in its poverty levels and little curbing of the virus. “They didn’t think about the poor,” he said, adding that philanthropist Bill Gates had told him he wanted to study how Pakistan’s trajectory had changed so quickly.

The prime minister blamed Pakistan’s energy issues on poor distribution, theft and line losses, and high cost of power generation. “We are stuck in agreements under which we have to pay for electricity whether we take it or not,” he said, noting that any increase in electricity prices inevitably resulted in inflation, placing the government in a difficult position.

“Unless we become an industrial country, we cannot move forward,” he said, adding that the country’s debt servicing left little money for development projects. “We will now also bring down the prices of electricity generated in government power plants. We are also devising a plan to improve power plants and distribution,” he claimed.

The prime minister also defended the performance of Punjab Chief Minister Usman Buzdar, adding that if any allegation against him were proven he should resign. He claimed Buzdar’s failure was his inability to defend himself from media criticism, adding that this was the PTI’s first tenure in power of the country’s most populous province and it was still learning.

“In Punjab, there is a bureaucracy imposed by the Sharif family. Now we have reached the right combination in Punjab, now the system will work properly. I think Punjab is moving in the right direction,” he claimed.

On Jahangir Tareen, a key PTI leader who has been implicated in a sugar inquiry report of profiting off hoarding and embezzlement, Khan said it had hurt him deeply when the allegations against Tareen came up.

To questions about the difficulties being faced by residents of Karachi, the prime minister claimed the city had suffered due to the “politics of linguistics” in the 1980s. “The loss of Karachi caused a lot of damage to Pakistan. Karachi’s problem is the lack of a local government system. Our case is pending in the Supreme Court regarding the local system of Karachi,” he said—journalist Khan did not ask any follow-up on the status of the local government systems in the provinces ruled by the PTI.

The prime minister concluded with another message to the opposition that he was not give them a “NRO.” Claiming that the opposition was trying to “blackmail” him, he said it would be very easy for him to compromise with the opposition to ensure the smooth functioning of the government—but added that he would never do that.