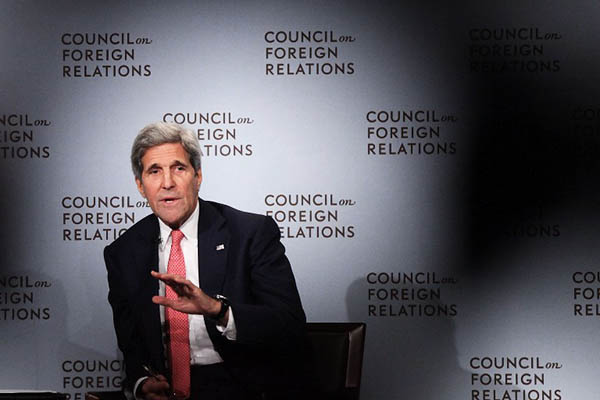 U.S. Secretary of State John Kerry said Friday it would be embarrassing to him and a blow to U.S. credibility on the world stage if Congress rejects the Iran nuclear deal.

“Do you think the Ayatollah is going to come back to the table if Congress refuses this and negotiate again?” he told the Council of Foreign Relations think tank in New York.

Kerry has spent recent days trying to sell the hard-fought deal to skeptical Americans as the Republican majority, 535-member House of Representatives has 60 days to review the deal. Congress can pass a motion of disapproval, which President Barack Obama can veto. An override of the veto requires two thirds approval in both the House and Senate.

“Do you think that they’re going to sit there and other people in the world are going to say, ‘hey let’s go negotiate with the United States, they have 535 secretaries of state’?” Kerry said. “I mean, please. I would be embarrassed to try to go out. What am I going to say to people after this as secretary of state? ‘Come negotiate with us.’ ‘Oh, Can you deliver?’ Please.”

Kerry warned that if Congress rejected the deal, it could make Israel and the United States more isolated. “Our friends in Israel could actually wind up being more isolated and more blamed, and we would lose Europe and China and Russia with respect to whatever military action we might have to take because we will have turned our backs on a very legitimate program that allows us to put their program to the test.”

The secretary of state faced blistering criticism on Thursday that he had been “fleeced” and “bamboozled” by Tehran, as he defended the Iran nuclear deal publicly on Capitol Hill. He encountered a tsunami of skepticism from Republicans on the Senate Foreign Relations Committee, during a marathon four-and-a-half-hour hearing.

The U.N. Security Council unanimously endorsed the agreement on Monday, paving the way to the lifting of punishing economic sanctions. The deal was reached in Vienna last week after tough negotiations between Iran and the permanent Security Council members—Britain, China, France, Russia and the United States—plus Germany.