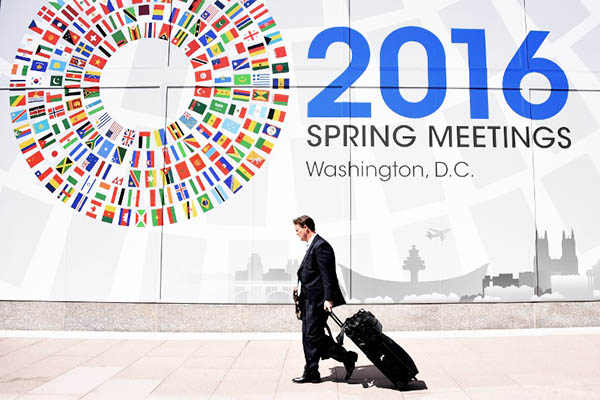 Emerging market economies, once the stars of world growth, now show “signs of distress” due to a darkening global outlook and tumbling commodity prices, the International Monetary Fund said Tuesday.

The IMF cut its growth forecast for developing and emerging market economies by 0.2 percentage points to 4.1 percent this year. It also lowered its 2017 prediction by 0.1 percentage point to 4.6 percent.

“While growth in emerging market and developing economies still accounts for the lion’s share of projected world growth in 2016, prospects across countries remain uneven and generally weaker than over the past two decades,” it said in its April 2016 World Economic Outlook. Plummeting commodity prices, declining investment growth and slumping trade have weighed on these economies, it said, while China’s slowing expansion after years of scorching double-digit rises has “subtracted measurably” from global growth and may have “substantial spillover effects.”

“Basically we’re all in this together, and what happens in one region will affect other regions,” IMF economic counselor Maurice Obstfeld said in a recorded statement, adding that policymakers should “act now.”

Persistent slow growth has “scarring effects” that can make recovery more difficult, he warned. But the prospects vary widely among countries. While Brazil and Russia languish in deep recessions and are projected to shrink by 3.8 percent and 1.8 percent respectively in 2016, India is a “bright spot” and forecast to grow 7.5 percent, it said.

Oil-exporting countries may need to slash expenses if crude prices stay depressed, the IMF said, while the outlook for exporting other commodities remains “weak.” But the IMF raised its 2016 growth forecast for China by 0.2 percentage points to 6.5 percent, citing announced stimulus plans. It also increased its estimate for next year by the same amount, to 6.2 percent.

The figures still represent a significant fall on the 6.9 percent seen in 2015—the slowest in a quarter of a century—and the sober report came as China struggles with a tough transition away from dependence on debt-fuelled investment and export industries.

A sharper downturn in the world’s second-largest economy “could lead to a more generalized slowdown,” the IMF said.

Beijing has sought to reassure investors that it will make much-needed reforms to tackle overcapacity in steel and the manufacturing sector, but doubts about authorities’ ability and will have weighed on the outlook. The IMF noted that “limited progress on key reforms” have fuelled concerns, “triggering turbulence in Chinese and global financial markets.” It said policy actions to quell market anxieties “have, at times, been ineffective and poorly communicated.”

The outlook for growth in many African countries has dimmed due to declining commodity prices and tightening global conditions for financing, the IMF said, with sub-Saharan growth expected to be “weak” in 2016 at 3.0 percent, a drop of roughly 0.5 percent on last year. Low oil prices will weigh on exporters such as Nigeria, it said, projecting 2.3 percent growth for Africa’s biggest economy this year, down 0.4 percent from 2015. It added that “disruptions to private sector activity through exchange rate restrictions” were adding to the weakness.