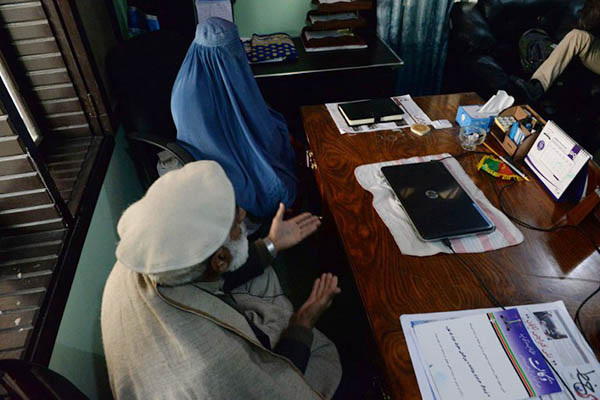 Afghan women seek to take control of their own lives and fight back domestic abuse.

When Nadia’s heroin addict husband began assaulting her with a metal rod, she did something unthinkable for many women in Afghanistan—she left him. Domestic abuse is endemic in the deeply patriarchal country, but for the first time a growing number of Afghan women are embracing divorce as a new kind of empowerment.

Divorce is Islamically deemed halal, but in Afghanistan it remains a greater taboo than the abuse itself in a culture that remains unforgiving to women who part with their husbands. “He is a drug addict and an alcoholic. I cannot live with him anymore,” Nadia said of her husband of two years as she sobbed quietly behind the billowing folds of her burqa. Her father, sat next to her, also welled up with tears.

Tribal elders from Nadia’s community attempted to intervene, cajoling her to go back to her abuser. Instead, she became the first woman in her family to ask for divorce. “God has given rights to women—divorce is one of them,” said Nadia, who is seeking legal separation with the help of Legal Aid Grant Facility (LAGF), part of a UNDP project established in 2014. Her husband has since left home, his whereabouts unclear.

National statistics are hard to come by, but in a sign of the upward trend LAGF says it has handled a 12 percent increase in divorce cases across Afghanistan over a period of three years. “Divorced Afghan women who have the chance to start a new life are becoming models for other women, showing that an unhappy or abusive marriage does not have to be a life sentence,” said Heather Barr, a Human Rights Watch researcher.

Afghanistan has been a battleground for women’s rights since the misogynistic Taliban were ousted from power in 2001, but divorce cases illustrate how gender parity remains a distant dream. It is relatively easy for men to initiate divorce, often just by verbally relaying the decision to their wives. But women must go to court, and can only seek separation based on specific complaints such as abuse or abandonment.

Retaining a lawyer is no easy task even for those who can afford one: death threats against those representing women in divorce cases are not uncommon.

“Divorce is one of the clearest examples of discrimination still written into law in Afghanistan,” Barr told AFP. “Given the difficulty in finding a lawyer, corruption and misogyny in the courts, and the low rate of literacy among women, the result is that for many women divorce is all but impossible.”

Some like 22-year-old Nafisa are stuck in limbo as her husband refuses to divorce her. After being engaged for 11 years, he married her in absentia. Based in London, he authorized an Islamic guardian to solemnize their marriage ceremony in Jalalabad. But he has since refused to return to Afghanistan or take her with him, prompting Nafisa to leave her father-in-law’s house and demand divorce.

Nafisa’s male relatives refused to let her talk to AFP, with her uncle only saying that the acrimonious divorce proceedings in court had brought great shame to the family and made her remarriage prospects difficult. It is partly for this reason that divorce is strongly discouraged.

Divorced women living independently are rare in Afghan society, and are often viewed with suspicion and become targets of abuse. Mediation is often the last hope to prevent the split—and women are almost always encouraged to compromise.

AFP sat through one mediation session in Kabul at the organization Women for Afghan Women, where 24-year-old Zahra met with her estranged husband and mother-in-law. The mother-of-four is seeking divorce on the grounds that he is a drug addict and took a second wife after falling in love with their neighbor’s daughter.

“He takes drugs in front of our baby. Then he starts abusing me,” Zahra said as her children hung around her. “Don’t ruin your life. Think about the kids,” her mother-in-law demurred before adding: “His other wife says it is your fault that he married another woman.”

The husband sat impassively nearby as recriminations flew. “People say you live in a shelter and do bad things,” the mother-in-law insisted.

Since moving out, Zahra has been living in a women’s shelter for battered women, which conservatives liken to a “whore house.”

“One day he beat me so much that I went to my brother-in-law and begged him to give him money for drugs,” Zahra said, tears streaking her face. The mother-in-law changed tack, attempting to coax Zahra home. “Come back,” she said, later insisting: “He won’t beat you again.”

This Zahra is to blame.. She s akin to untamed Buffalo.

She must lead her hubby onto a Righteous Path, so make him drink from the sacred creek .