Home Lightbox End of an Era for Hafiz Saeed 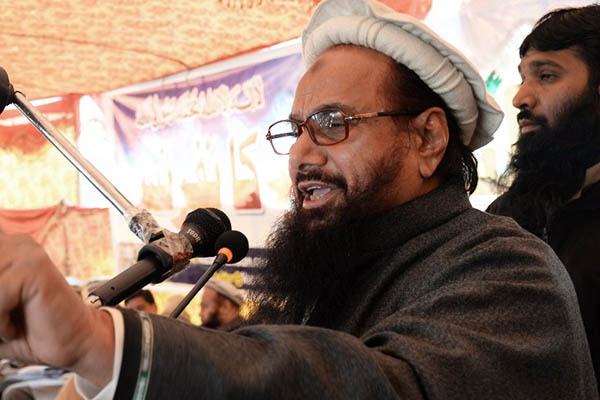 Explosives planted inside a parked car detonated in Lahore’s Johar Town area last week, killing three people and leaving 24 others injured. The bombing appeared to target the home of banned Jamaatud Dawa chief Hafiz Saeed, with the vehicle parked next to a police picket that has been erected outside the house to ensure security. Saeed was not home at the time, as he is currently serving an 11-year sentence at Kot Lakhpat jail, part of a wider crackdown against terror funding undertaken by the Pakistani government at the behest of the Paris-based Financial Action Task Force.

“The counter-terrorism department (CTD) of Pakistan said it had launched 23 cases against Hafiz Saeed and 12 of his aides for using five trusts to collect funds and donations for Lashkar-e-Taiba,” read a news report published in The Daily Times on July 4, 2019. “Two banned LeT-linked charities, Jamaatud Dawa and the Falah-e-Insanyat Foundation, were also targeted, the department said in a statement. All the assets of these organizations and individuals will be frozen and taken over by the state, said a counter-terrorism senior official, speaking on the condition of anonymity because he was not authorized to speak publicly,” it said, quoting the CTD as saying the action was in accordance with U.N. sanctions against the individuals and entities.

No mention was made, in either the newspaper report or the CTD press release, of Saeed operating his own courts across Pakistan in parallel to the country’s judicial system. In 2016, daily The News reported that Saeed had been running stealth courts in violation of the Constitution: “The supra-constitutional Sharia courts, established by Jamaatud Dawa, operate across the country and only the Lahore court of this parallel judicial system has issued verdicts in 5,550 cases, including murder trials.”

Samina Yasmeen, director of the Center for Muslim States and Societies, teaches Political Science and International Relations at the University of Western Australia. She has written about the sectarian background of Hafiz Saeed and the Ahle Hadith school of Islam to which he belongs. Her book, Jihad and Dawah: Evolving Narratives of Lashkar-e-Tayba and Jamaat-ud-Dawa (Hurst 2017), sheds new light on how Pakistan was shaped by the actions of Saeed.

Born in 1950 in Sargodha, Saeed hails from a Gujjar family that migrated to Pakistan from Haryana during Partition. His younger maternal uncle and later his father-in-law, Hafiz Mohammad Abdullah Bahawalpuri, entrusted Saeed with the study of hadith and the task of spreading the knowledge. Saeed went on to join the Islamic Studies Department at Lahore’s University of Engineering and Technology in the 1970s, during which the collapse of the PPP government had led to an increased focus on Islam as the definer of Pakistani identity. As an academic at a leading Pakistani university, he started giving sermons in a mosque and gradually drew students and teachers to salafist thinking.

In 1980, when the Afghan jihad was still in its infancy, Saeed came into contact with Abdur Rasul Sayyaf through Abdullah Azzam, a salafi of Palestinian origin who was teaching at the International Islamic University, Islamabad. Azzam, as an active participant in the Afghan jihad and Islamic Union for Liberation of Afghanistan, introduced Saeed to the jihad in Afghanistan. But his active participation in the project took some time to develop.

In 1982, Saeed left for Saudi Arabia for two years to study at King Saud University, where he came into contact with Sheikh Abd al-Aziz ibn Baz (1909-99), who had taught at the Shariah Faculty in Riyadh and had been vice chancellor and then chancellor of Medina University. He was also appointed Grand Mufti of Saudi Arabia in 1993. Saeed’s association with Ibn Baz reinforced his views on the significance of jihad and its necessity against the Soviet presence in Afghanistan.

At the time, one Zafar Iqbal was also teaching at UET. Originally part of the Barelvi sect, he had been converted to Ahle Hadith by Hafiz Mohammad Abdullah Bahawalpuri. Once trained, he was entrusted by Bahawalpuri with the task of spreading Ahle Hadith thinking. While working closely with Saeed in Lahore, Iqbal established close links with students in Faisalabad. He also went to Saudi Arabia for further training in 1984 and upon his return joined Saeed in establishing the Jamaatud Dawa (Organization for the Propagation of Faith) in 1985.

The process of association ultimately resulted in the formation of the Markaz Da’wah Wal lrshad (MDI) in 1987, an organization that was to be engaged by the Pakistan military, though the idea of setting it up might have been discussed a year earlier. Its creation occurred against the backdrop of emerging divisions in the Ahle Hadith movement in Pakistan, as Allama Ehsan Elahi Zaheer consistently opposed the political leadership prior to being fatally injured in a bombing targeting a meeting of the Jamiat-e-Ahle Hadith.

In her book, Yasmeen writes that it is difficult today to ascertain the precise time of the Pakistan military’s initial engagement with MDI jihadis. The speed with which the creation of MDI was followed by the training of jihadis in “galyat” and then in Afghanistan, however, would have been easier with active facilitation by the military, especially the Inter-Services Intelligence. “As the main agency responsible for recruiting or negotiating with individuals and groups interested in jihad in Afghanistan, the access secured by MDI would not have materialized without ISI’s concurrence. Historical accounts of jihad n Afghanistan by MDI members also recount the presence and monitoring by Pakistan’s military officials. References to the ‘wonderful achievements’ of the Pakistan military in Afghanistan and the training provided by the ISI to nearly 80,000 mujahedeen in Afghanistan also suggest a collaborative relationship between MDI and ISI,” she writes.

On Nov. 26, 2008, between 24 and 26 terrorists from Pakistan allegedly entered Mumbai and killed 126 people, while injuring 327 others. The Indian government accused Pakistan of involvement in orchestrating the assault; Indian Prime Minister Manmohan Singh initially blamed groups based within the country, but Foreign Minister Pranab Mukherjee claimed that “preliminary prima facie evidence indicated elements with links to Pakistan … were involved … and urged Pakistan to dismantle the infrastructure that supported militants.” On Dec. 8, 2008, Mukherjee told the Rajya Sabha that the Mumbai attacks were carried out by elements from within Pakistan. Through Pakistan’s envoy in India, Shahid Malik, New Delhi asked Islamabad to dismantle Taiba, as well front-group Jamaatud Dawah, and to grant Indian investigators access to Saeed.

Then-president Asif Ali Zardari—who lived to regret it—expressed his shock and dismay at the attacks and declared that he was “hurt and bleeding” and stood with the Indian people and their leaders. Sympathy, however, did not extend to sending then-director general of ISI Gen. Shuja Pasha to New Delhi to investigate the Mumbai attacks, as requested by the Indian prime minister. Islamabad had initially agreed to this request, but wavered when faced with strong domestic criticism. Zardari, too, backtracked and claimed that the two leaders had only agreed to a visit by a director of ISI and not the director-general, who had only recently taken over the reins of the institution.

Science and the supernatural

When the Americans took Kabul in November 2001, according to the Washington Times, they came across some papers in a safe house that carried a record of meetings that had taken place between Osama bin Laden, Ayman al Zawahiri and other Al Qaeda members, and AQ Khan, Sultan Bashiruddin Mehmood and other scientists from Kahuta. The Washington Post, meanwhile, reported on March 3, 2002 that then-CIA chief Tenet had rushed to Pakistan to investigate the matter.

Among the men alleged to have participated in that meeting was Sultan Bashiruddin Mehmood. A brilliant scientist and Islamist, he spent 20 years at Kahuta enriching uranium before being made head of the Pakistan Atomic Energy Commission in 1995. Upon his retirement in 2001, he was enriching uranium at Khushab. He made no secret of his belief that plutonium enrichment in Pakistan should not be kept secret and that it should be passed around to other Islamic countries. He reportedly also had expert knowledge of the global nuclear black market.

But while he was a scientist by profession, Mehmood held views that are seldom encountered in any scientific texts. In 1987, he wrote Mechanics of the Doomsday and Life after Death, claiming that natural calamities were a result of rampant moral degradation. Two years later, he published Cosmology and Human Destiny, this time arguing that sunspots controlled global history and had caused events like the Second World War; the Indian War of Independence in 1857; and the rise of the mujahideen. He claimed Pakistan could extract energy from the heat produced by jinns, as the Quran said they were made of fire. In 1987, he also founded the Holy Quran Research Foundation, which investigated science in the light of Islamic tenets, eventually claiming that the 2001 American invasion of Afghanistan was “the last war between Islam and the infidels.”

On Oct. 23, 2001, Mehmood was arrested by the ISI at the headquarters of Umma Tameer-e-Nau, an organization he had set up for humanitarian work in Afghanistan. When the CIA interviewed him he denied that he had ever made contact with Osama bin Laden but admitted to meeting Mullah Umar to discuss the construction of a flour mill. He said he knew bin Laden only as a humanitarian worker who built schools and hospitals for the poor.

However, after months of questioning, he admitted to having met Osama bin Laden, Al Zawahiri and other Al Qaeda members repeatedly, including on the day Al Qaeda struck the World Trade Center in New York. This time, he disclosed that he had also discussed the bombing of an American city with nuclear weapons. He told the CIA that bin Laden had obtained fissile material from the Islamic Movement of Uzbekistan of Tahir Yuldashev, then said to be hiding in South Waziristan. Mehmood said he had passed on information on nuclear technology to bin Laden but had not discussed triggering a Hiroshima-like nuclear blast in America. When he was thereafter subjected to a lie detector test, he failed it.

The era of Hafiz Saeed’s prominence was shaped by the influence of his teachings on people like Mehmood. Its end in 2021 comes as Pakistan is on the threshold of another crisis in neighboring Afghanistan as U.S. forces exit the region without having ensured lasting peace between the Taliban and the democratically elected government of Ashraf Ghani. Who shapes the coming potentially bloody era—with Pakistani officials repeatedly warning of a looming civil war in Afghanistan—remains to be seen.