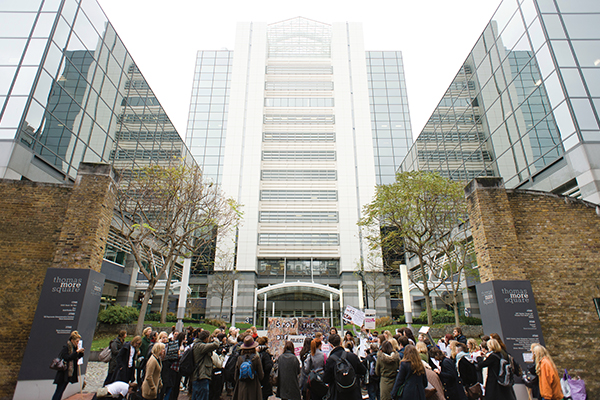 One woman takes on Rupert Murdoch to end half a century of topless pictures.

[dropcap]I[/dropcap]t was the height of London’s euphoric Olympic summer last year. The usually cynical and dismissive British public were waking up to an unfamiliar feeling—sporting success on the track and national celebration in the press. Lucy-Anne Holmes, a 36-year-old actress and novelist, was looking through the daily papers, and noticed that even The Sun newspaper was reflecting the fact that female athletes were at the forefront: Jessica Ennis, already established as the iconic face of the Games, had just won gold in the heptathlon; Victoria Pendleton another cycling gold.

But when Holmes got to page 13, there it was again—The Sun’s regular topless feature—larger than life, and larger than the images of female sporting prowess: it had just been moved back 10 pages for the occasion. “It really pissed me off,” Holmes says. “The paper is always showing pictures of men in suits doing things, while women just stand around in their underpants.”

It was that night, lying awake and annoyed, Holmes resolved to start the No More Page 3 campaign. But taking on a national institution isn’t easy.

For the past 43 years, if you turned over the front page of Britain’s bestselling newspaper, you’d invariably be confronted by a pair of naked breasts. In the past, the girls on the page were often teenagers with breasts that looked augmented and improbable; more recently, there’s been a move toward a more “natural” and less adolescent look. But every daily edition of the tabloid has, for almost half a century, promoted an idea of female availability. So prominent is Page 3 that satirical magazine Private Eye accorded the paper’s proprietor the moniker “Rupert ‘Thanks for the Mammaries’ Murdoch.”

In the early ’70s, the novelty was a succès du scandale. Murdoch had already bought the world’s bestselling English-language newspaper in 1969, the now shuttered News of the World, which thrived historically on murder and salacious sex exposés. But the daily Sun, which he acquired soon after, had a staid reputation. So Murdoch ordered a redesign to mimic the more successful Daily Mirror, and added a topless model on the inside page—an innovation actually started by a rival Australian paper in 1966.

Though often referred to as “a bit of fun,” Page 3 has been an icon of Murdoch’s tabloid project. Like The Sun’s famous headline when the Argentine cruiser, the Belgrano, was torpedoed by a British submarine during the 1982 Falklands war—“Gotcha!”—the daily pin-up helped sum up the chirpy shock-jock tone. Page 3 appealed to a male constituency of working-class conservatives, who still enjoyed the social permissiveness of the ’60s. Those who disapproved were killjoys, snobs, censorious feminists.

So Page 3 is a peculiarly British battleground in the culture wars. It’s prominent in one of the most famous editions of The Sun. On the morning of the 1992 general election, after a front page attacking Labour leader Neil Kinnock, the feature pictured a large, middle-aged woman in Victorian underwear, wearing a clownish red wig with the caption: “Here’s what Page Three will look like under Kinnock.”

The next day, as the Conservative Party was returned for an unexpected fourth successive victory, the front page featured the same clownish figure, dancing in front of the Houses of Parliament, underneath the headline “It’s the Sun Wot Won It!”

Ten years later, taking on Page 3 wasn’t any easier. Rebekah Brooks, close confidante of the Murdoch family, said she planned to get rid of the feature when she took over the editorship of The Sun in 2003. But even the ultimate insider and Queen of Fleet Street couldn’t actually get rid of the bare-breasted symbol of male liberty, though obvious implants and “just 16” models were frowned upon.

Brooks was felled by the phone-hacking scandal, and dozens of senior Sun reporters and editors have been arrested in related bribery allegations over the last year, but the current editor Dominic Mohan vociferously defended Page 3 in the Leveson Inquiry into press ethics as an “innocuous British institution.” News International might have been holed below the waterline, but if the ship was going down, the seminaked women were going last.

Page 3 is so prominent that satirical magazine Private Eye accorded the paper’s proprietor the moniker ‘Rupert “Thanks for the Mammaries” Murdoch.’

However, Mohan hadn’t reckoned on Holmes. Though she had never been involved in a campaign before, within days, Holmes had created a petition at change.org urging Mohan “to drop the bare boobs from The Sun newspaper.” She adroitly deployed the laddish tabloid tone for her counterattack. “We are asking very nicely,” Holmes wrote, using a cheeky humor that has made the campaign hard to dismiss as some dour academic feminism. Television presenters “Philip and Holly don’t flash up pictures of Danni, 19, from Plymouth, in just her pants and a necklace, on This Morning, do they, Dominic?”

For the past two years, Alison Webster, an award-winning photographer, has been the chief Page 3 photographer and the woman responsible for the marked shift toward “health and beauty.” When approached for a response to Holmes’s initiative Webster says, “We have a policy of not commenting, because it gives their campaign more publicity.” “It’s so stupid,” Webster continues. “Just a bunch of feminists and nonfeminists  … People should be able to make their own choices.” In response to the “Well, don’t buy the newspaper” line, Holmes retorts: “I don’t buy that argument. The paper isn’t bought and read in isolation, we all have to live in a society that says, ‘Shut up and get your tits out.’”

Despite resistance and ennui in some quarters, Holmes’s campaign was quick to take off. “It wouldn’t have been possible without social media,” Holmes says. “Twitter helped us approach opinion formers and celebrities, while Facebook linked us all up.” In the next few manic months, Holmes got to know hundreds of other women through the Internet who felt the same. Some had disturbing stories of male intimidation, abuse, and even rape, allegedly inspired by the newspaper’s constant insistence on entitlement to women’s bodies.

Given its heavily concentrated ownership—four male proprietors control 70 percent of the British national press—this was not a cause likely to be taken up by Fleet Street. But social media allowed Holmes to bypass the mainstream media. Celebrities started retweeting links to the petition. Tony Blair’s former press supremo, Alastair Campbell, approached on the street by a campaigner, also lent his support on Twitter. And then the extraordinary happened this February. A “Tweet Murdoch” campaign finally elicited a response.

Using the #nomorepage3 tag @Kazipooh tweeted: “Seriously, we are all so over page 3—it is so last century!” Astonishingly the 82-year-old replied: “page three so last century! You maybe [sic] right, don’t know but considering. Perhaps halfway house with glamorous fashionistas.”

It seemed that, thanks to the extraordinary direct access of the peer-to-peer networks, the campaign might have achieved success in only six months. But it was not to be. Before long, former Labour deputy prime minister John Prescott broadened the attack. “I see you’re considering axing The Sun’s Page 3,” he tweeted. “While you’re at it, cut pages 1-2 and 4-76 too.” Within days, Murdoch had retracted and complained about politically correct “hypocrites” who “scream about Sun.”

Realizing she needed to change tactics, Holmes took a page from the playbook of Avaaz and Political Scrapbook, two websites instrumental in getting Murdoch’s News of the World closed down after it was revealed its journalists had hacked the phone of a murdered schoolgirl, Milly Dowler. Since Murdoch and The Sun wouldn’t budge, she decided to go after the advertisers.

So far, the toy manufacturer Lego has decided not to renew a sponsorship deal with the tabloid. And the upmarket supermarket chain Waitrose is considering removing The Sun from its shelves. Earlier this month, the British Girl Guides expressed its support, and Holmes is currently lobbying Prime Minister David Cameron to ask him if he agrees with the Girl Guides about the demeaning effect of the “iconic piece of sexism” in the national press. As I write, the online petition is hovering just under the 100,000 mark. The battle for Page 3 is far from over.