England ‘Positive’ Ahead of Pakistan Series 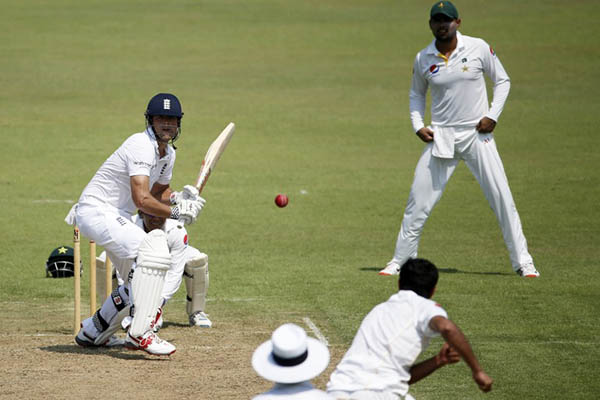 England assistant coach Paul Farbrace vowed Wednesday that England has laid to rest the memories of their rout at Pakistan’s hands in 2012 ahead of a Test series starting later this month.

The two sides will meet in a three-match series starting in Abu Dhabi from Oct. 13, and Farbrace was confident his team has a “great chance” at victory.

“We’ve got senior players who’ve been here and experienced it, and I think there was a feeling that although they lost the last Test series here 3-0, it was one they could quite easily have won,” said Farbrace of England’s defeat in the United Arab Emirates three years ago. “They didn’t, that’s history, it’s gone now. But I think we’ve got a great chance with this group to play some really good cricket, and we’re looking to be as positive as we possibly can be.”

Farbrace admitted his team realized the enormity of the task.

Pakistan are set to use spin as the main weapon on the dusty U.A.E. wickets, just as they did in 2012 when Saeed Ajmal took 24 wickets and left-armer Abdul Rehman 19. And they now have leggie Yasir Shah and left-armer Zulfiqar Babar in their squad.

“We’re coming here knowing it’s going to be a very, very tough series,” Farbrace said. “I said at the end of the Ashes series I expected this to be a tougher series for us to play in.”

England triumphed in the Ashes against Australia 3-2 in August.

Farbrace, who was assistant coach of Sri Lanka when they were attacked in Pakistan in 2009 in an incident that has since forced Pakistan to play home matches in the neutral venues of the U.A.E., warned his players not to waste their chances. He cited the drawn two-day game against the Pakistan A-team, which finished in Sharjah on Tuesday.

“The application with the ball was outstanding,” he said. “The one thing we’ve just had a quick chat about is that, to win a Test match, you’ve got to take 20 chances—and we’ve missed a couple of chances. That’s something we’ll have to work very hard on, and something we prided ourselves on in the Ashes series. We’ve still got a good few days to go, so there’ll be plenty of catching [practice] done over the next few days. But generally, I think we had a really good two days. We saw how players adapted quite quickly to the situation and conditions.”

England will have another chance to tune up for the Tests with a second two-day game against Pakistan A, also in Sharjah.