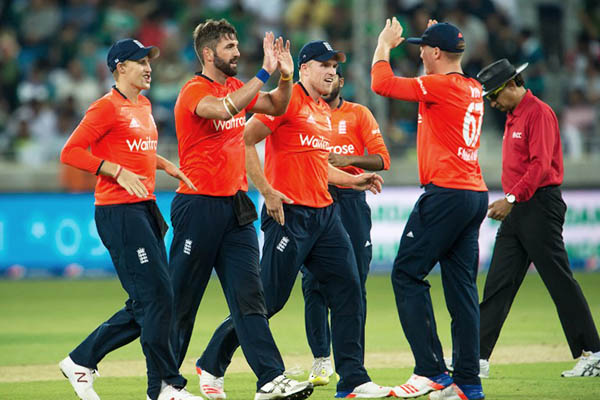 Pakistan lost by three runs in the second match of series held in U.A.E.

Paceman Chris Woakes held his nerve in the final over to give England a hard-fought three-run win in the second Twenty20 international over Pakistan in Dubai on Friday.

Woakes conceded just seven runs in the 20th over to restrict Pakistan to 169-8 and help England defend a 173-run target to give his team an unbeatable 2-0 lead in the three-match series at Dubai stadium.

The 24,000 fans, mostly expats from Pakistan, had expected their team to pull off a sensational win after skipper Shahid Afridi smashed a blistering eight-ball 24 with three sixes and a boundary. But Anwar Ali failed to connect on the last delivery off which Pakistan had needed four for victory.

Afridi took 22 off the 18th over by Woakes but his dismissal on the last ball left Pakistan to score 25 off the last two overs. Pakistan’s batsmen were once again reckless as most of them got good starts but failed to capitalize.

Ahmed Shehzad top-scored with an 18-ball 28 with two fours and as many sixes.

England won the first match—also in Dubai—by 14 runs. The final match is in Sharjah on Monday. “It was a bit stressful as captain,” said England’s stand-in skipper Jos Buttler. “We certainly weren’t as fluent as we liked. Staying calm is key with the nature of Twenty20 cricket and you have to give the bowlers the ownership of what they want to do and trust them. It’s a fantastic win and we are very happy.”

Afridi said his team has plenty of work to do. “First I want to congratulate England as they are playing really well,” said Afridi. “But we have to improve our fitness and fielding before the World Twenty20 [next year in India]. I had a good opportunity to win the game but I missed it.”

Leg-spinner Shahid Afridi, who took 3-15 in his four overs, derailed the England batting after they looked well-set at 32-0 in the fourth over. Afridi trapped Alex Hales leg before for 11 and then had Jason Roy caught behind for 22-ball 29 (two sixes and a four) to leave England at 47-2.

Joe Root made 20 before Buttler and Vince lifted England with a 35-run partnership for the fourth wicket. Afridi returned for his last over to have Vince caught in the deep. Vince hit two sixes and three boundaries.

His wicket was Afridi’s 86th in as many matches, beating countryman Saeed Ajmal (85 wickets in 64 matches) as the highest wicket-taker in all Twenty20 cricket. Buttler smashed three sixes and a boundary to give England a challenging total to defend.

England, who won the first match by 14 runs in Dubai on Thursday, rested skipper Eoin Morgan in one of four changes to their side. Pakistan brought back Shehzad and Malik in place of Mohammad Rizwan and Imran Khan Junior.