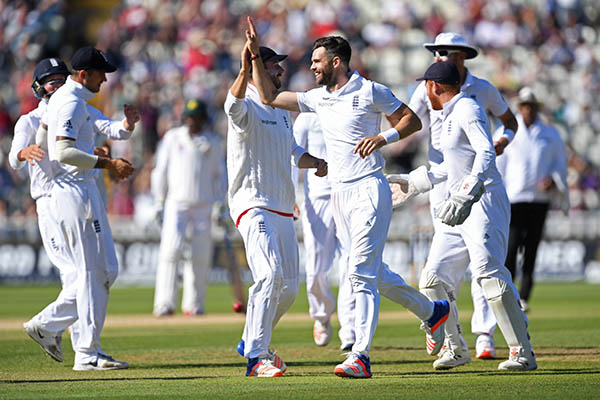 Tourists failed to achieve target of 343 runs, leaving them 2-1 in four-match series.

England beat Pakistan by 141 runs in the third Test at Edgbaston on Sunday to go 2-1 up in the four-match series.

Pakistan were bowled out for 201 after being set a target of 343 for victory when England captain Alastair Cook declared the hosts’ second innings on 445 for six early on Sunday’s fifth and final day.

A dramatic collapse before tea, where they lost four wickets for one run in 23 balls, effectively ended Pakistan’s chances of saving the game. Pakistan’s last-wicket pair of Sohail Khan (36) and Rahat Ali delayed defeat with a stand of 50 in 67 balls.

But Birmingham-born Moeen Ali, who earlier in the day made a quick-fire 86 not out, ended the match when the off-spinner caught and bowled Sohail off a hard-hit drive with 13.1 overs remaining.

The fourth Test at The Oval starts on Thursday.